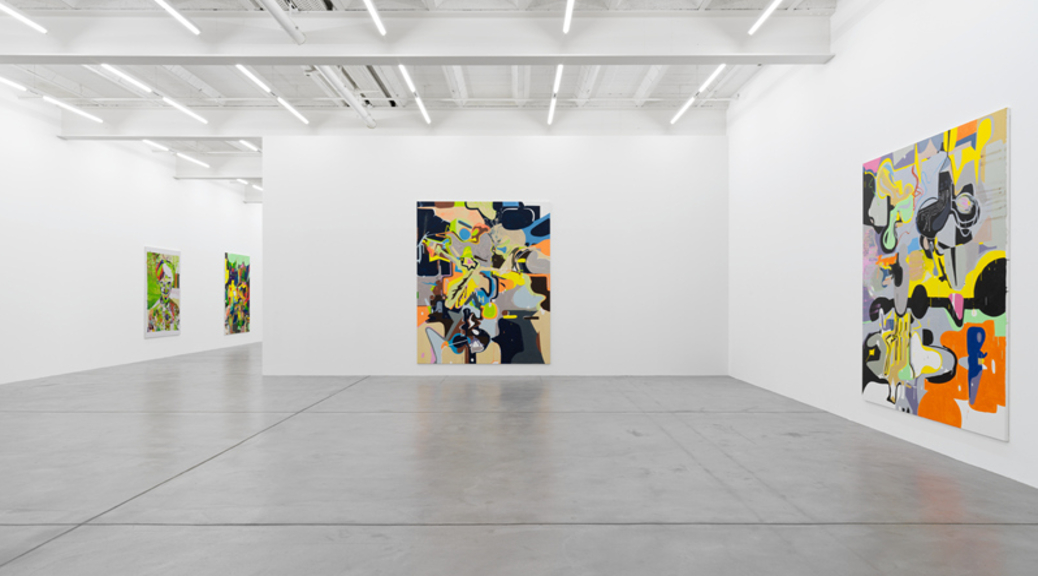 Blending drawn lines, stretched agglomerations of form, and translucent scrims of paint along the printed surface, Michael Williams’ paintings situate us on an unlikely border between the familiar and the indecipherable. He is drawn to the sort of painterly impasse presented by the material and connotational conflicts of oil painting versus computer printing.

Williams enjoys the directness that comes from working digitally, he is also invested in the process of printing’s implied challenge to the doctrine of painting. By designing the content of his paintings in the digital environment, Williams both rejects the expressionistic dictum that painting is a direct extension of the body and reinvents it for the 21st century through the terms of computerized experience.

His work is simultaneously pluralistic and conceptual, extending and interrupting modernist formalism while assimilating the ironies and contradictions of daily life.

In his recent works, Williams is also exploring the dialectic relationship between painting and photography. He states that he’s jealous of the photographer’s ability to indicate meaning in a subject without first having to work through the manifold and historically charged layers, as the painter does. This feeling of envy, however, is not simply an emotional state the artist is in; it is evidence of the complex relationship between the two media. Painting as the “original,” and often higher valued, medium carries with it the baggage of art history and thus delivers meaning only through the aforementioned layers.

Taking photos of “real” oil on canvas portraits, Williams appropriates the advantages of photography: a clean indication of the subject matter detached from the struggle of its creation, free of physical traces of his craftsmanship, and the physicality of a corpus made of pigment and canvas.

In Williams’ photographed paintings all of this—the materiality, the artist’s decisions, the perceptual openness required of the viewer—is only a prerequisite, a negative of what is afterward photographed and printed. As a result, the smooth surface of the canvas, its industrial perfection frees this “negative” from its qualities as a painting—and at the same time from the historical baggage that seems to be required of a great painting.

Rather than asking the viewer to parse through the medium, time, physicality, emotion, etc., the portraits are offered up fresh and clean: to be consumed, perhaps in a single bite. Williams’ large-scale “Puzzle Paintings” use a similar multi-channel and cross-media approach: Using his representational drawings as appropriated images, he works through an analog process of drawing and collage to produce the source images for his Puzzle Paintings.

The finished canvases present a discontinuous whole and summon the fragmented nature of our contemporary everyday. Many of the Puzzle Paintings share a palette and method with the photographed paintings. Williams is seemingly uninterested in the viewer’s need to determine “which is which,” however, the viewer’s desire to make this distinction is inevitable.

Though these works are highly conceptual, they bear a strong commitment to classical painting. Whether Williams composes his paintings on canvas or screen, they are informed by art history and pop-cultural iconography, whilst nonetheless leaving space for unexpected events to occur during the process. As a result, they emanate a sometimes ironic, sometimes funny tension that is always seductive to the eye.

Michael Williams was born in 1978 in Doylestown, Pennsylvania. In April 2017, Williams will be the subject of a major solo exhibition at The Carnegie Museum of Art in Pittsburgh, Pennsylvania. Williams has exhibited his work at venues and institutions including: Secession, Vienna; the Museum of Modern Art, New York; Dallas Museum of Art, Dallas, Texas; Wexner Center for the Arts, Columbus, Ohio; Ballroom Marfa, Marfa, Texas; and the Garage Center for Contemporary Culture, Moscow. In 2015, Williams held his first solo museum exhibition at Musée des Beaux-Arts de Montreal in Montreal, Canada.