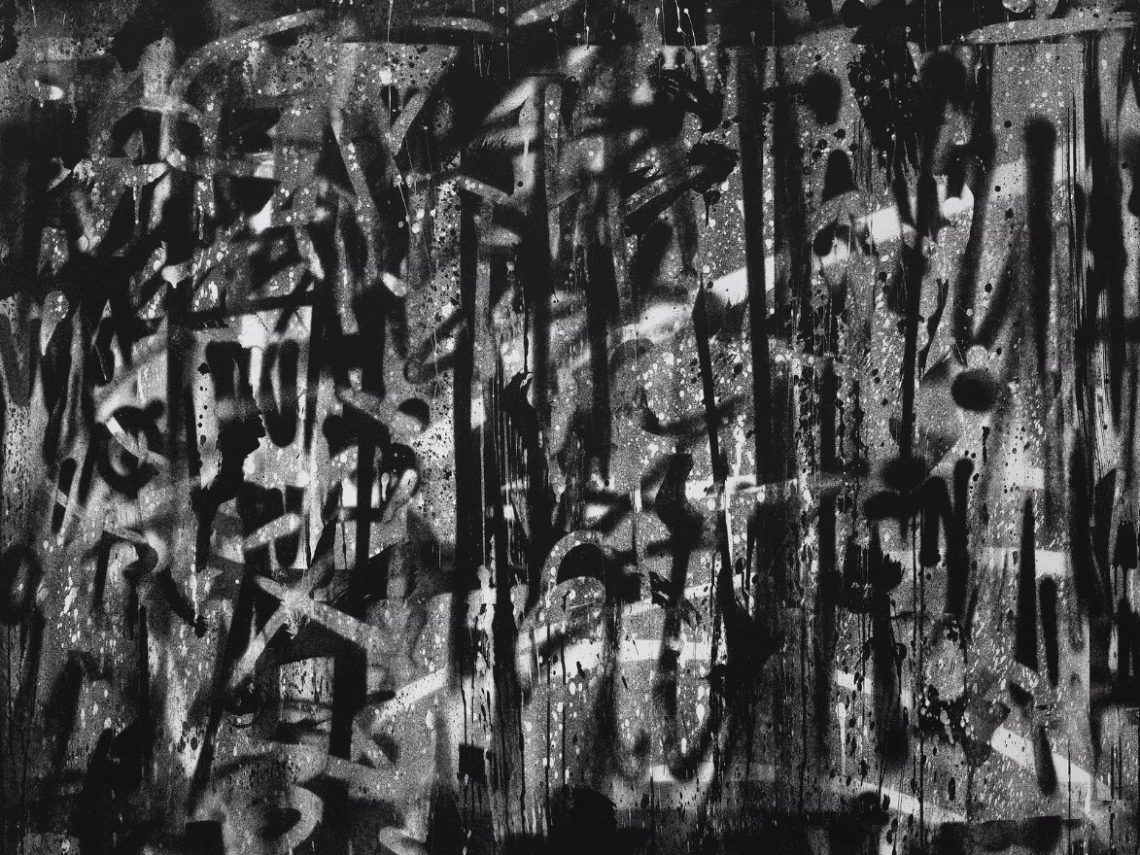 “How do you make sense, on an emotional, intellectual, and pragmatic level, of the visual residue one leaves behind?”, Pendleton asks. His works capture a microhistory of marks and impressions: drips, splatters, strokes, erasures, shapes, word fragments. These are the accumulated remnants left over from work undertaken in his painting studio, remnants that have been composited to create richly textured visual fields.

On the Untitled (Days) canvases (shown above) the first to be executed at this size, the textures run dense. Layered marks and sprays are dispersed all over. Blacks and whites range from the lightly translucent to the deeply opaque.

Other works, like the Black Dada Drawings reformat the same source material, shifting in scale and focus. The tonal contrast is dramatically reduced—black on black—and the cropping is often tighter and closer, highlighting smaller moments.

Pendleton has described his paintings as an inquiry into the composition of subjectivity from the visual residue one leaves behind; indeed, in both the paintings and the drawings, “minor moments become major moments because of how they articulate who we are or who we might be at any given moment. It’s a visual poetics of disruption.”

Pendleton frequently cites counterpoint as a signature of his work, referring to the kind of musical composition in which multiple simultaneous voices are organized with an emphasis on horizontal movement instead of strictly vertical synchronization.

To the degree that each of the works is organized, contrapuntal lines form interference patterns and parallaxes. Similarly, the day-to-day remains of a studio practice are visible here only in their continuous displacement, passing through various modes and mechanisms of abstraction. The work asks us to examine these modes and mechanisms more closely, to notice the ways in which they configure and reconfigure our attention and intentions.

THOMAS SCHEIBITZ - SIMILARITIES AND IMITATIONS OF THE VISIBLE