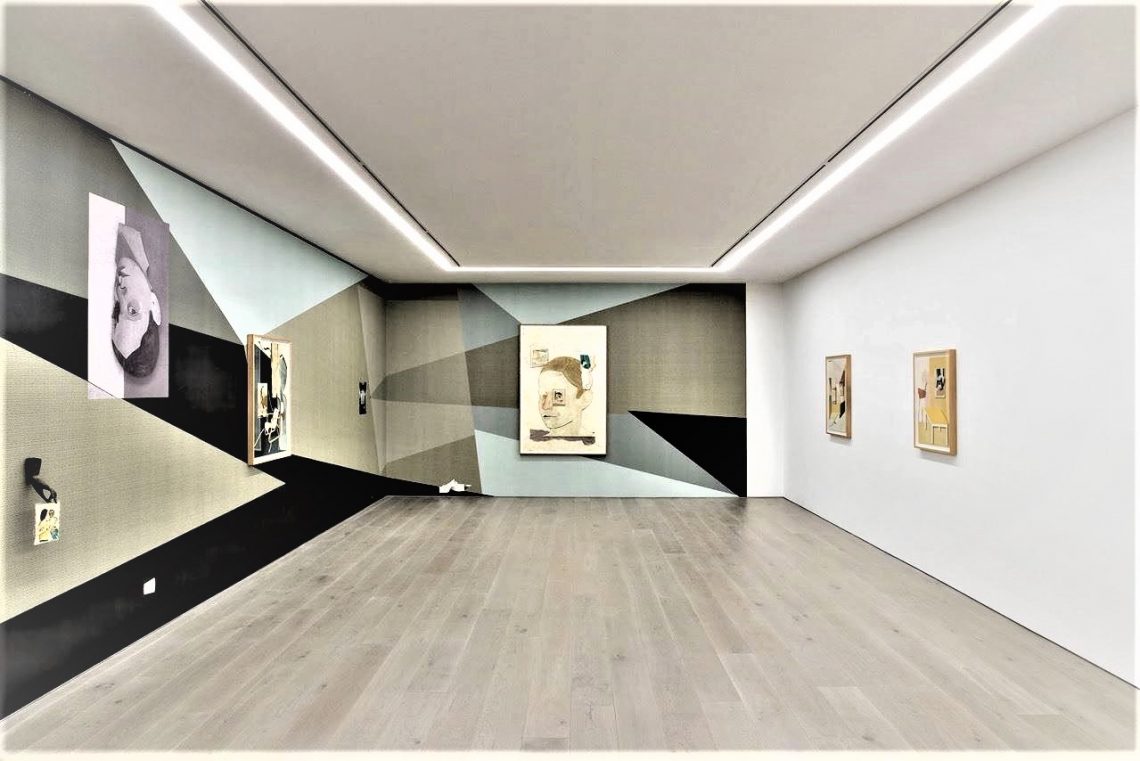 Swedish artist Jens Fänge excels in creating subtly understated yet emotionally charged territories that merge abstract space with the human figure. His composite paintings and nested assemblages are often integrated into murals with vanishing points so elusive that they induce vertigo.

Conflicting angles, off-kilter floors, and tilted walls make for fragmented interiors that seem neither two- nor three-dimensional. These ambiguous zones are inhabited by partially or fully rendered figures that gaze from framed portraits or appear like cut-out protagonists in a puppet or shadow play. Paintings within paintings suggest stacked narratives and layered time.

As our conditioned mind attempts to read the variable elements, proportions, and perspectives in logical order, we find ourselves at an impasse. This is because Fänge, like the Cubists a hundred years ago, acts in tactile space rather than in visual space. As beholders, we must give ourselves over to the maze and suspend ordinary spatial perception.

Fänge’s stage-like scenes are intimate and melancholic and viewing them can feel like a furtive, even voyeuristic act—as if we were spying on someone’s psychoanalysis session. The painted rooms appear rife with personal memory and shreds of dreams. The figures’ gestures, however, are simple and universal: people walking, sleeping, and dressing; lovers embracing, and children being held. Stories seem to hang in the air, but no linear narrative can be deduced. It’s as if the beginnings and endings of each pictorial tale perpetually occur at the same time, afloat in a larger and nonspecific realm of geometric abstraction.

Fänge’s protagonists appear in configurations that seem at once random and meaningful. The technique of assemblage, which allows the artist to move around components until a desired constellation is reached, underscores the relativity of perspective. Objects and figures may be perceived entirely different depending on the viewpoint. This applies to the viewer outside and inside the paintings:

Fänge’s characters are observers just like us. This emphasis on looking extends to the architecture: small paintings inside larger paintings inside murals function like a room’s eyes, while oversized heads feature painted inset rooms in place of eyes. Everything is seeing and we are part of that perceptive chain—our gaze an extension of the artist’s gaze and the gaze of the rooms and figures he creates.

While Fänge’s previous compositions brimmed with pastel and vibrant colors, his current palette is markedly muted and plain. Beiges and browns prevail, evoking patina over skin and walls. The paintings’ surfaces appear aged, wrinkled, and in some instances even bandaged. Rooms seem folded like envelopes, with patches of negative space signaling absence and silhouetted figures suggesting ghosts from the past. As always in Fänge’s works, there’s a sense of interdependency of the human body and its surroundings: if one is affected, be it by ornament or injury or loss, the other is too. Interior and exterior are joined: we are the space and the space is us.

Besides a series of new assemblages, Fänge’s New York exhibition includes two wallpaper “murals.” Both are geometric spatial abstractions—one in full color, while the other, a faded echo of the first, appears like a memory or a dream of the former. Painted portraits are floating on top of both zones, as if struggling against the undertow of passing time. They seem like momentary glimpses at our transient individual existence, the blink of an eye in the space-time continuum.

Alcove, the exhibition title, refers to a small painting of a nested chamber with a vault, a bed, and a window. This recessed, intimate room replaces the eye of a large painted head, perhaps alluding to the intricate interior design of a place we call ego, that secluded room each of us controls and knows. Or do we? What really is the self? Our bodies, minds, histories, memories, and experiences are only descriptive aggregates. But they don’t make up “selfness,” just as ceilings, walls, floors, and windows don’t make up “roomness.”

Observing our everyday minds, we see thoughts running in every which direction, much like the spatial lines in Fänge’s paintings. Our thinking is rarely linear and focused; thoughts split and turn, get wrapped in other thoughts, and are derailed by memories, projections, and emotions. It’s not a clear picture. If Fänge’s paintings are snapshots of the mind space, they attest to our wanderings yet also to our potential for equanimity and stillness. His works can function like koans—paradoxical statements that induce doubt and disorientation so we may disable our analytical impulse, loosen the tight grip of habitual perception, and exit the board game of conventional thought. Our mind doors might swing open, and the tranquility of Fänge’s painted spaces might envelop us.
-Sabine Russ

"THE FORTUNE OF HAVING BEEN THERE" ANGEL OTERO