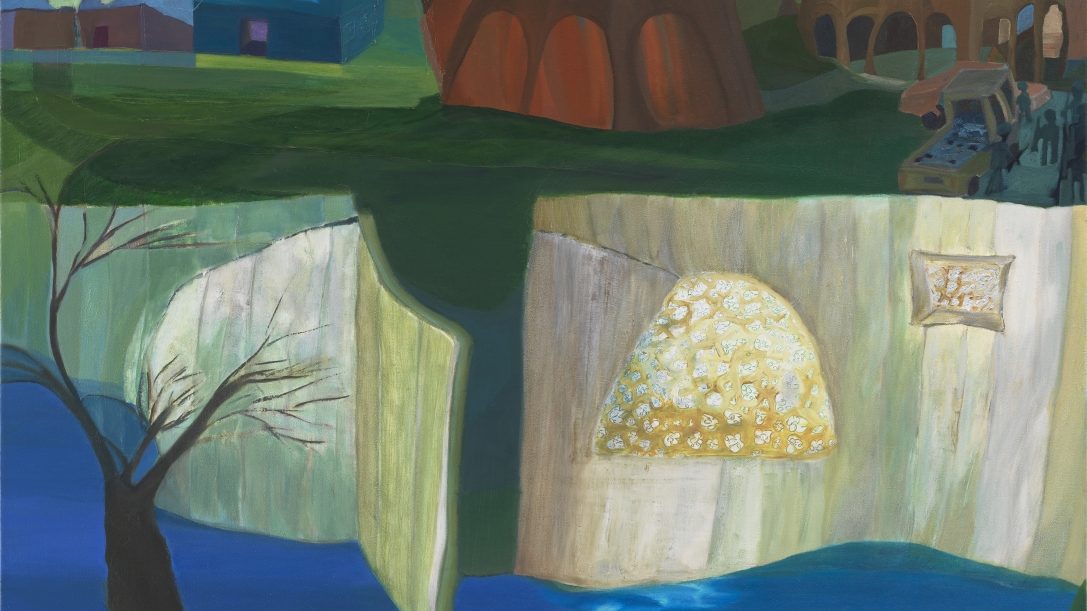 “Gate to the Blue”celebrates the work of Ficre Ghebreyesus who has created an oeuvre of unique visual narrative and language that has always been distinguishably his own.

Borrowing the title of this show at Galerie Lelong & Co. from one of his works – Gate to the Blue suggests not only a color significant to Ghebreyesus, but also an opening to the boundless sea and sky.

It is an entry point to the unknown which was a constant in the artist’s life as a refugee who fled his native Eritrea to eventually settle in New Haven, Connecticut. The artist was highly influenced by music and was a lover of the blues genre that originated in the journey of enslaved people over water and is rooted in African musical traditions and spirituality.

In his distinctive palette, a marriage of unexpected harmonies arises from Ghebreyesus’s multiplicity of colors. Shifting seamlessly between abstraction and representation, the artist’s notable use of translucent layers of acrylic melds the people he met, the religions and cultures he was exposed to, and the alphabets of the seven languages he fluently spoke onto the canvas.

In Mangia Libro (c. 2011), a morphing land and seascape surround a boy in yellow who walks through a dream-like space while reading a book clutched in his hands. The figure seems to float in the composition comprising windows and passageways in the background, while a whorl of iridescent green in the foreground hints at a body of water with rich biodiversity emerging from its surface. The work’s title “mangia libro” means “book-eater” in Italian. Having been Ghebreyesus’s nickname as a child, the painting commemorates the promising student whose education was halted by war.

Ghebreyesus made a formal choice to leave many of his monumental paintings unstretched—evoking religious frescoes of his childhood through their scale and manner of hanging close to the wall. Presented in their current state, the canvas’s cloth-like quality also reminds one of tapestries and alludes to the Eritrean textiles the artist conveyed in his vibrant checkerboard patterns.

These patterns are a leitmotif in Ghebreyesus’s oeuvre, often subtly incorporated within the composition (as in Mangia Libro) or depicted in rapturous abundance such as in Zememesh Berhe’s Magic Garden (c. 2002–2007)—the largest work in the exhibition measuring close to eight feet tall and sixteen feet wide.

While Ghebreyesus is best known for the exuberance of color in his paintings, Gate to the Blue also highlights the artist’s darker-toned palette, suggesting the struggles he overcame in his life. Earth tones in deep greens, reds and browns are masterfully overlaid in Nkisi (c. 2011), which gets its title from the sacred nkisi of west-central African lore. Africans who were uprooted during the Atlantic slave-trade era carried knowledge of nkisi-making with them.

In the painting, Ghebreyesus has depicted a red boat with small human figures journeying across a green sea as a larger figure looms in the background and gazes peacefully upon them. Readily incorporating references from various nations of the African continent and global cultures, Ghebreyesus’s work portrays a Pan-Africa that originates from his dreams and imagination, suggesting a yearning on his part as a member of the African diaspora.