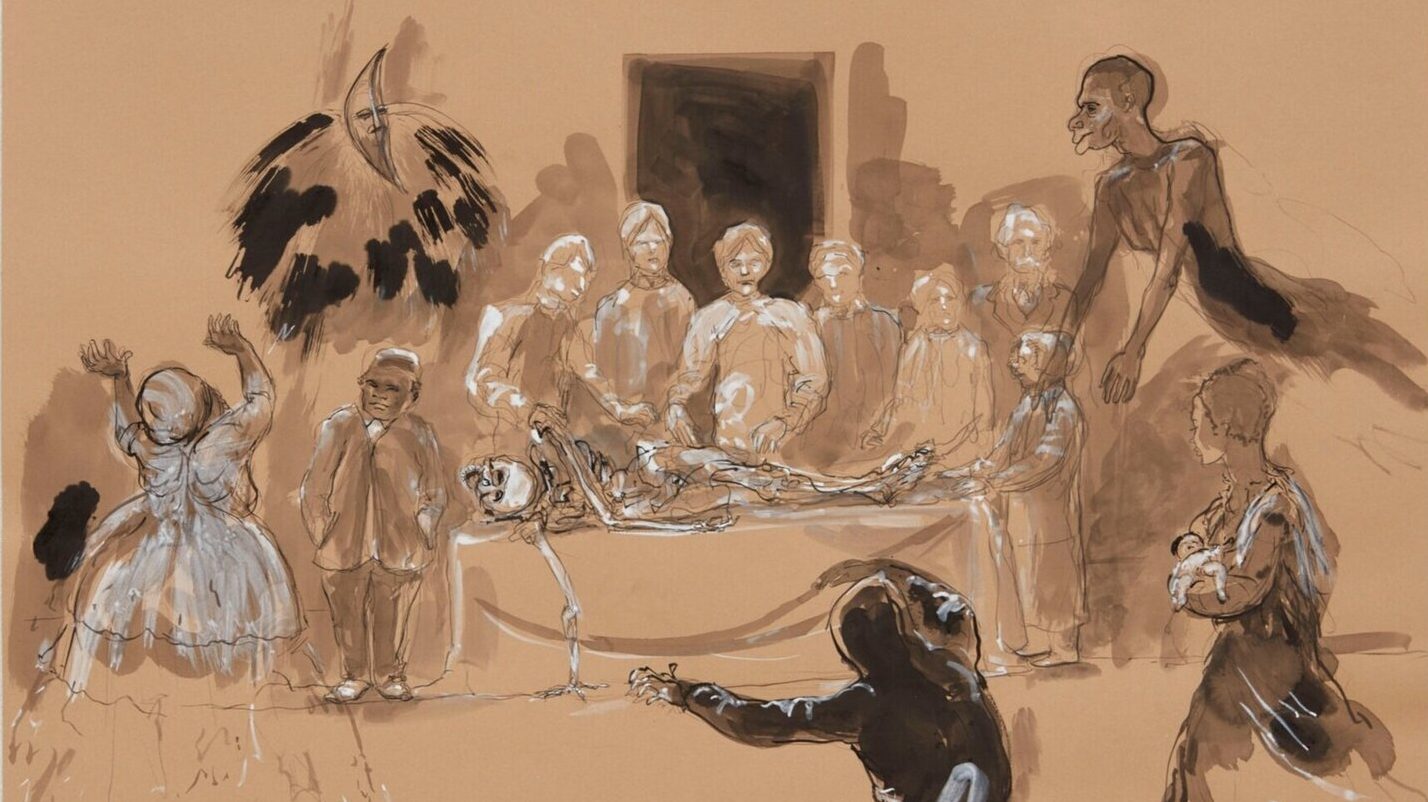 Kara Walker is among the most acclaimed artists working in the U.S. – using a diverse range of artistic practices to explore issues of race, gender, sexuality and violence.

Sikkema Jenkins & Co. has brouht together an exciting selection of works from the artist’s personal archive alongside more recent drawings. Furthermore the show also previews a suite of works that will be included in Walker’s first major exhibition in Switzerland at the Kunstmuseum Basel opening in June 2021.

Previously kept within her private archive, these works on paper reveal the scope of Walker’s process, from sketches, studies, and collages, to texts and “dream journals.” Materials such as watercolor, graphite, and ink give the drawings a sense of spontaneity and immediacy.

To view these works on paper is to realize the intimacy and intensity of Walker’s vision in creating her subjects, speaking back to history and thus simultaneously reforming it within the present. The figures within Walker’s drawings insist upon themselves as the protagonists of a new mythology, a narrative revealed to us through bodies and words and unspeakable acts.

In the 38 drawings of The Gross Clinician: Pater Gravidam (2018), a centerpiece of the exhibition, history is all-consuming; the title refers to Thomas Eakins 1875 painting, The Gross Clinic, which depicts the public operation on a woman by Dr. Samuel Gross. Swathes of graphite, sumi ink, and gouache flesh out scenes of bodily and psychological violence.

The context within each drawing is not always clear; some figures are suspended against blank backgrounds, or placed against ruinous landscapes, barren fields and shadowed mountains. While some drawings explicitly depict acts of medical brutality, reflecting the series’ namesake, others invoke a multitude of traumas and symbols, including colonial-era “Yankees,” the snake in the Garden of Eden, palm trees, and police in full riot gear. The Gross Clinician: Pater Gravidam finds its genesis within Walker’s new mythology; chaotic, unholy, and unending.

Born in Stockton, California in 1969, Kara Walker was raised in Atlanta, Georgia from the age of 13. She studied at the Atlanta College of Art (BFA, 1991) and the Rhode Island School of Design (MFA, 1994). She is the recipient of many awards, notably the John D. and Catherine T. MacArthur Foundation Achievement Award in 1997 and the United States Artists, Eileen Harris Norton Fellowship in 2008. Walker is a member of the American Academy of Arts and Letters (elected 2012) and American Philosophical Society (elected 2018), and was named an Honorary Royal Academician by the Royal Academy of Arts, London in 2019. She lives and works in New York.

Walker was selected by the Tate Modern for the 2019 Hyundai Commission. She responded with a large-scale public sculpture in the form of a four-tiered fountain entitled Fons Americanus. Directly alluding to the Victoria Memorial at Buckingham Palace, Walker’s sculpture stands as a “counter-memorial,” a playful yet incisive subversion of such monuments’ original public function within the context of European imperialist projects.

Surrounded by two pools of water as a disaster at sea, the work represents a counter-narrative to the Western pride of empire-building, a mythologized origin story built upon the violent and tragic foundations of our collective history. Fons Americanus is on view at the Tate Modern Turbine Hall through November 8.

"GATE TO THE BLUE" FICRE GHEBREYESUS AT LELONG GALLERY

"Back of the Moon" Neo Matloga at Stevenson Gallery Cape Town