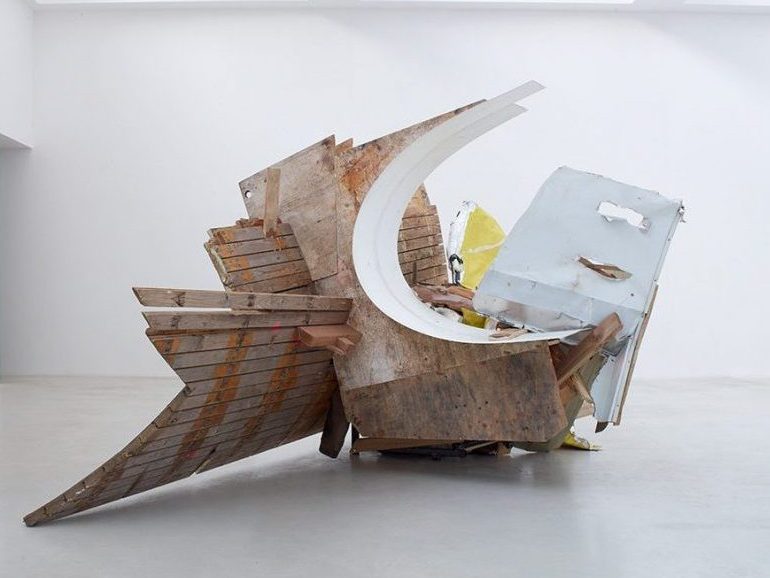 Ghent based artist Peter Buggenhout is considered one of Belgium’s most unique and radical sculptors. The artist’s highly artificial creations are irresistibly fascinating for the beholder. The mere size and variety of the surfaces and materials is impressive and makes viewing the works demanding.

But they awaken not just a pleasant sense of curiosity. Although the objects are elaborately produced artifacts, there are saturated with illusionary moments of transience and decay that in their seriousness refer to representations of vanitas in terms of art history. In their emotionality, the physically palpable experience is like an experience of nature.

Peter Buggenhout often returns to the ambivalence of a sense of threat and the sublime, aesthetic categories that emerged during romantic period while experiencing landscapes. The age of overpowering nature has given way to a new era, today it can no longer be naively seen as an aesthetic place of retreat.

The artist’s assemblages and installations become suddenly legible as dark moments of a constantly changing repetition, that as in nature could also take place in human culture and civilization. His works progress systematically and develop over the long term in several consistent series that are best identified by the materials used.

They are impossible to describe exhaustively in formal terms due to their amorphous complexity. Their titles are each taken from parables, myths, or motifs in which perception is delayed, negated, or mirrored. Different ways of reading the world illustrate the tense relationship between the visible and the utterable, and ultimately between the artwork and the word.

The sculptures in the series “Gorgo” for example consist of fabric, horse hair, and black animal blood. The inclusion of material of animal origin refers to the existential tension of being between fragility and constant change. The Gorgo (Gorgon) is a horror-figure from the myth of Medusa. Her snake covered head in ancient art was supposed to protect by making an unbearable reality visible in reflection. This series in particular can be linked to the term “abject,” what the body has excreted, discarded, and suppressed that in our reality appears horrific, but in profound psychological terms still has an impact and an influence.

In “Mont Ventoux” and “On Hold”, Buggenhout also found programmatic titles, referring to the very first description of a mountain climb, written by Petrarch in 1336. At the apex of Mount Ventoux, he cast his glance across the nature that had been overcome, pulled out his copy of St. Augustine and began reading about the sins of visual desire. The epochal link of aesthetic and contemplative views, triggered by this new experience of the world, is also reflected in this group.

Buggenhout amplifies the sensory impressions using various materials, forms, colors, and surfaces: bleached animal guts, painted and raw artificial materials, cardboard, metals and wood form open and block-like complexes that offer new views from every perspective. Since these groups in particular demand to be viewed while moving, Buggenhout created for the mid-sized format Mont Ventoux pieces plinths. As part of the artwork, they appeal to the beholder to explore the variety of the world in miniature by walking around the work in the alternation of silhouettes and individual shapes.

In terms of art history, Buggenhout developed his sculptural work from post-minimalism, overcoming an essentialist understanding of art. Minimal art sought to reach a final point by using industrial forms of production, materials, and surfaces that present themselves as hermetically sealed and adapt spatially to architecture. Despite thematic and geometric reduction, minimalism was shaped by a great deal of theatricality and consciousness of form; despite all the contrasts, this links Buggenhout’s work to this important historical position.

But minimal art differs in its hermetic self-referentiality, accompanied by loquacious theoretical pronouncements. For Buggenhout creates an oeuvre that is highly suggestive in which a nameless world of destructive and yet creative potential emerges. As he put it, “The world becomes brutally present when deprived of the comforting words that grant us the illusion of understanding that which surrounds us. My work is brutally present and I give no credence to words. (They play games with us)”.