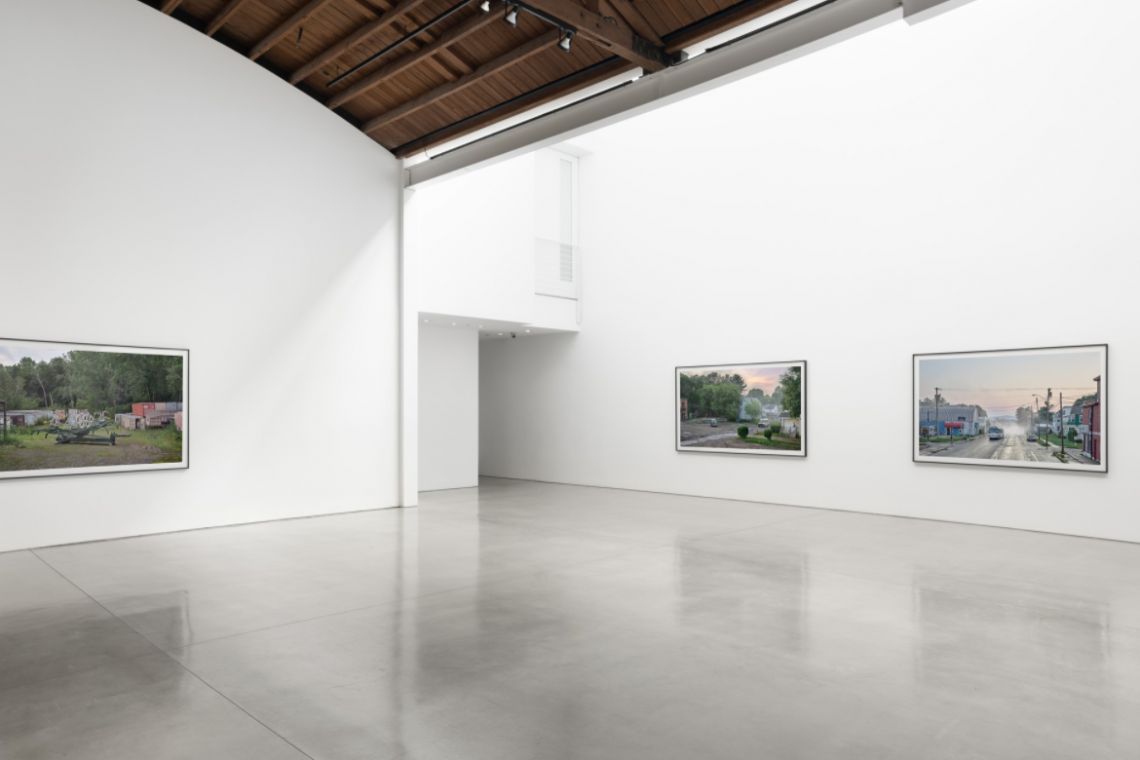 For three decades, U.S. based Gregory Crewdson’s photographic series of houses, landscapes, and people have become canonical representations of the liminal and forgotten in America.

Series such as Twilight (1998–2002), Beneath the Roses (2003–08), and Cathedral of the Pines (2013–14) show fantastical scenes of wonder and anxiety, their quiet, bristling stillness implying an airless claustrophobia that persists even in wide-open expanses.

Set in a postindustrial urban landscape, the series depicts locales of removed isolation, each of which Crewdson spent months scouting and staging before production began: a taxi depot, a traveling carnival lot, an abandoned factory complex, defunct bars and diners, and vacant storefronts.

These pictures are a meditation on brokenness, a search, a longing, and a yearning for meaning and transcendence. The figures are surrounded by vast decaying industrial landscapes and the impinging nature―and there’s a certain underlying suggestion of anxiety. But I hope in the end the theme of nature persisting, and of figures seeking out light, offers hope for renewal, even redemption.
—Gregory Crewdson

The series takes its title from an entomological term. Moths use transverse orientation to fly at a constant angle relative to a distant light source, such as the moon; exposure to artificial light confuses the insects’ internal navigation, changing their behavior and destination.

Crewdson anchors his photographic figures in relation to a source of light: a street lamp or traffic light, or the hesitant, transitional illumination of twilight. In each image, the viewer is positioned above in a semi bird’s-eye vantage point.

Redemption Center (2018–19) is set in a parking lot where a recent thunderstorm has left behind puddles on the ground and a thick atmospheric fog hanging in midair. A wall faces the viewer, its faded lettering bearing the titular inscription.

Outside the open door of a trailer, two teenagers are positioned beside a pile of returned cans and bottles. Closer in the foreground, beneath a towering lamppost, a man pauses to cast his gaze down at a mysterious scattering of rose petals floating on a large puddle. The figure, unmoored from time and place, appears frozen with climactic hesitation.

In scenes that combine hope with the forgotten and restlessness with ennui, the world of these photographs is laden with premonition. Confounding the eerie, elusive intimacy of an Edward Hopper painting with a Hitchcockian cinematic and compositional precision, Crewdson’s images create wordless, open-ended narratives populated by characters and places that feel remote and unsettling—yet deeply familiar.