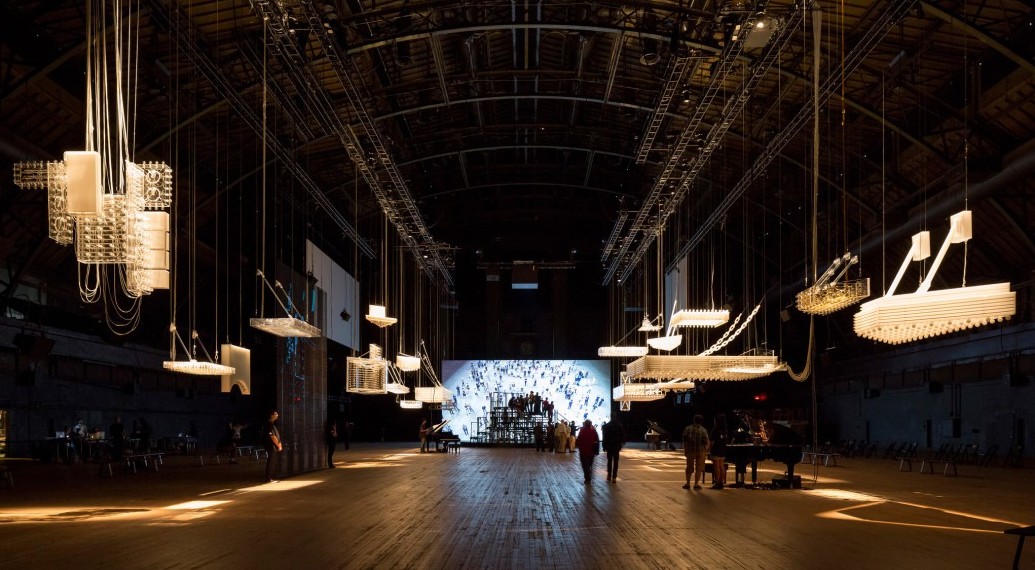 French artist Philippe Parreno fills Milan’s Hangar Bicocca with an impressive installation including film, video and sound. Throughout his carreer Parreno has always explored the borders between reality and its representation utilizing the vocabulary and means typically associated with a variety of media such as radio, television, cinema and, recently, information technology.

He also also questions the concept of authorship and has worked in collaboration with highly influential artists, architects or musicians. “Hypothesis” at Hangar Bicocca is an immersive, experimental project highlighting sound and light in its aesthetic and physical manifestations. The survey is conceived as a choreographed experience following a precise script devised by Parreno. Curated by Andrea Lissoni, the show is inhabited by a series of key pieces together with recent works and music according to a mise-en-scène by the artist.

Several of the artist’s most significant works are presented reconfiguring them in order to radically redefine Hangar Bicocca’s industrial premises. Shadow, light and and sound intercept and surround architectural elements, enveloping visitors in an environment where spacial dimensions seem to participate in an orchestrated score.

Upon entering the vast, dark room, viewers are confronted by a long series of ‘marquees’ hanging overhead. nineteen, plexiglass structures, realized between 2016 and 2105, comprise the installation ‘Danny the Street’. Situated at various heights, the luminous rectangles set in a line form a imaginary street that winds its way through the exhibition space. each of the suspended ‘Marquees’ light up at intermittent moments and, like musical instruments, follow a score composed by Parreno. Two pianos are placed on the floor, independently playing a score that determines the timing sequence for the entire exhibition.

The show also includes another key work: ‘Another Day with Another Sun’ – an artificial light that crosses through the exhibition space with a system of suspended tracks. Concurrently we see  ‘Alien Seasons’, a film built around five brief sequences that show the mimetic qualities of a certain species of giant cuttlefish that lives in the pacific ocean  and ‘Marilyn’, a short movie that is a ghost portrait of the famous movie star, focusing on Marilyn Monroe’s subjective points of view.