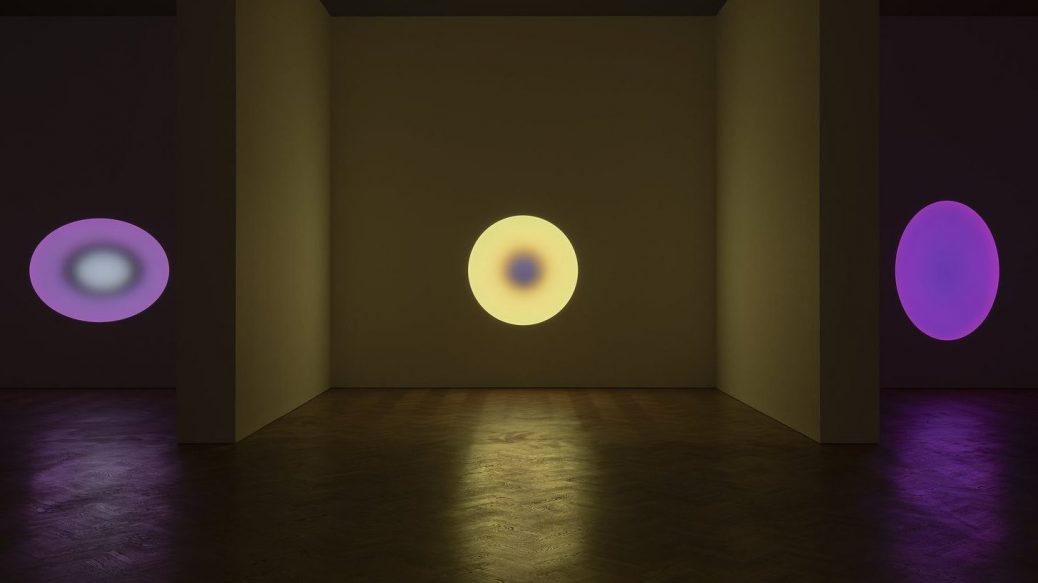 James Turrell’s recent Constellation works, the focal point of this exhibition, are the culmination of Turrell’s lifelong pursuit. Generating what the artist has called “spaces within space,” these luminous portals are instruments for altering our perception; gazing into them results in the slow dissolution of the boundaries of the surrounding room, enveloping the viewer in the radiance of pure color.

Fusing the temporal, sensuous, and illusory qualities of his projection works and architectural installations, the Constellations synthesize several aspects of Turrell’s practice.

Unlike his early projection pieces, however, they are not about generating an illusion; instead, they greet the viewer with the actual materiality of light, what Turrell calls “the physical manifestation of light, which we have trained our eyes too readily to look through rather than to look at.”

Presented in site-specific chambers, the works feature elliptical and circular shapes with a frosted glass surface animated by an array of technically advanced LED lights, which are mounted to a wall and generated by computer programming. Influenced by the notion of pure feeling in pictorial art, Turrell’s earliest work focused on the dialectic between constructing light and painting with light, building on the sensorial experience of space, color, and perception.

These interactions became the foundation for Turrell’s oeuvre. Since his earliest Projection Pieces (1966–69), his exploration has expanded through various series, including Skyspaces (1974–), Ganzfelds (1976–), and perhaps most notably, his Roden Crater Project (1977–) near Flagstaff, Arizona.

Applying through an advertisement in the back of Artforum Turrell entered graduate school in the fall of 1965 at the newly established University of California at Irvine, where he studied under artists Tony DeLap, John McCracken, and David Gray as well as with art historians John Coplans and Walter Hopps.

During this time, Turrell produced some of his first light sculptures, using gases to create flat flames that burned in even colors. These early works proved challenging to control, halting further experimentation in the medium. In 1966 Turrell rented a studio space in the former Mendota Hotel in Ocean Park, California, where he began to work with high-intensity projectors as a light source, producing the first of his Projection Pieces, Afrum-Proto, in the spring of 1966. Shortly thereafter, Turrell decided to focus exclusively on his practice and abandoned his graduate studies. From the end of 1968 to 1969 he participated in the Art and Technology program at the Los Angeles County Museum of Art, which brought contemporary artists together with engineers.

Alongside fellow artist Robert Irwin and psychologist Dr. Edward Wortz, Turrell studied the optical phenomenon known as the Ganzfeld effect—the loss of perceptive fields through sensory deprivation. These studies of perceptual anomalies further ignited his interest in the celestial realm, and he began to incorporate aviation into his practice by creating sky drawings with the artist Sam Francis.