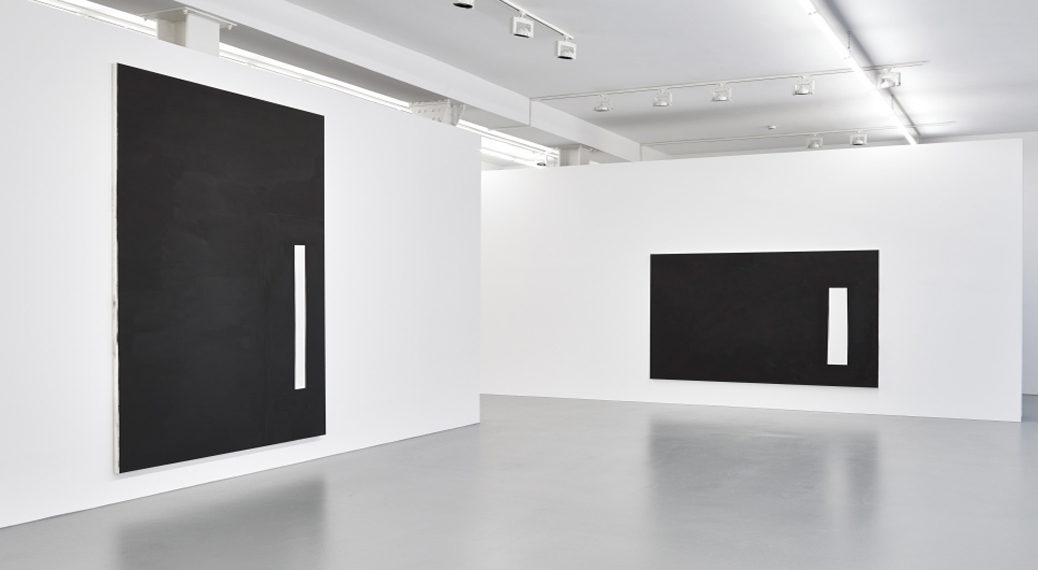 Gallery Hetzler is staging a comprehensive selection of works by André Butzer in two parallel running shows . One of the gallery spaces displays recent paintings from 2016 and 2017 as well as a new artist book – created in collaboration with Hans Werner Holzwarth (Holzwarth Publications). Whereas the second gallery space offers an insight into the early work of the artist with paintings from 1999 to 2008, selected from private collections.

Since 2010, Butzer creates the so called “N-Bilder“ (“N-images”). “N” is an artistic measuring conceived by Butzer, which is not a calculable, rational quantity but rather represents a recurring, fertile space. The white, bar-like interstice that clearly determined the buildup of previous “N-Bilder” here is nearly invisible, just vaguely identifiable or almost completely closed as a gap.

It seems that the “N-Bilder“ approach a finale, an inevitable target of dissolving the white plane. However, “N“ is an infinite quantity, always incomplete and original. Thus, the now blurry, brownish gap does not describe an end of these images but the potential of a recurring beginning and a continuous recreation. In Butzer’s selections of recent works as well as for the artist book a strong parallel can be found. Two works – a more than four meters wide painting (Untitled (Früchte), 2016-2017) and a small drawing on paper – clearly stand out. They depict round, colourful faces, recurring “Friedens-Siemens-children“ as Butzer calls them, risen from their coloured background.

Vibrant orange and yellow predominate these two works but also blue, green and violet nuances appear. They seem like a returning to the painter’s early motifs and are yet very different to his previous works. Neither distinct brushwork nor pastose paint application or overlapping areas characterise these paintings. Instead, they continue the painterly achievements of the “N-Bilder“ in total devotion to the liveliness of his work, summon their matured imagery from these and develop them further – images as totalities and “fruits“.

While the selected paintings from private collections introduce into the expressive imagery since 1999, the “N-Bilder” build a bridge to the painter’s entire creative cosmos (“NASAHEIM“), which resembles a permanent border crossing, thus, experienced from here, determines what makes the work.
.