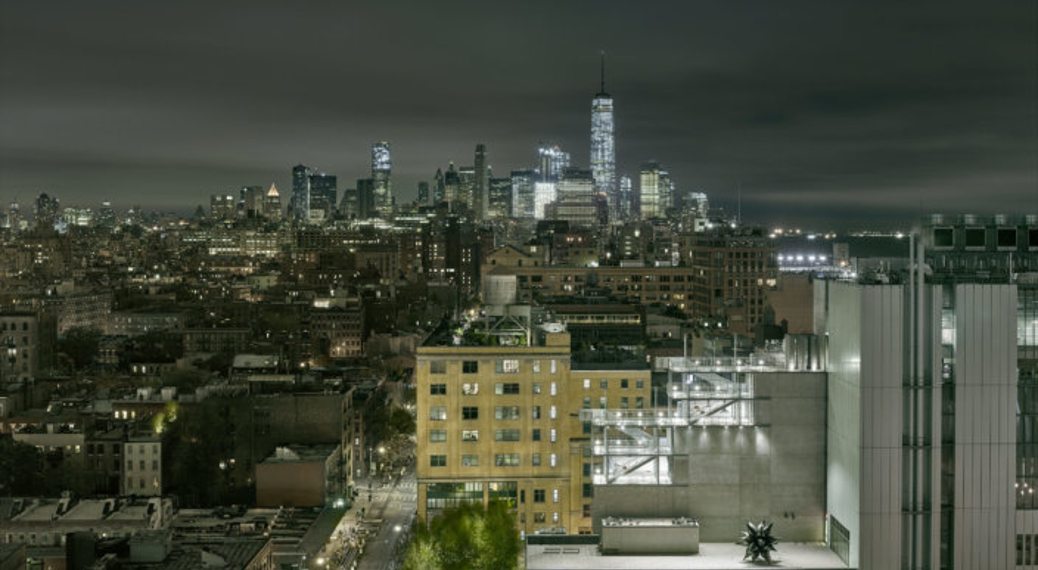 Modernity and the light we see it in is a long-standing theme in John Riddy’s work ranging from the modernist architecture of 1930s Britain through to the architecture of Courbusier in Chandigarh. This exhibition of new works from the past two years consists of large scale colour photographs which depict disparate views similarly characterised by notions of progress.

London’s Victorian railway arches, a tree local to Riddy’s studio newly lit with led lighting, a view across Lower Manhattan encompassing the High line, the new Whitney Museum of American Art and Ground Zero. Metropolitan ambition is variously documented in sequential images that chart changing views, spatial progression or altering light and weather. The viewer is invited to consider formal and temporal relationships both within and between still images carefully juxtaposed.

The evidence of historical progress etched on structures that surround us has been a constant theme for Riddy and it is closely related to his long-standing determination to make photographs which chime with everyday urban experience. The works on show here come from walks in South London and a hotel room in New York and their sequencing echoes our own experience of a walk or a window view changing over time.

As with other recent series every aspect of these works is managed and made by Riddy himself. He sees the researching, taking and printing of the photograph as part of one process that can only be intuitive if he himself is the author of all its aspects. The final print is intended to be a resolution and distillation of that process.

John Riddy was born in Northampton, England in 1959 and studied Painting at Chelsea School of Art. His photographs have recently been included in A Certain Kind of Light, An Arts Council Touring Exhibition, Schlaflos/Sleepless: The Bed in History and Contemporary Art, 21er Haus, Vienna, 40 Years – 40 Artists, UMCA University of Massachusetts and Ruin Lust, Tate Britain, London. Riddy’s works are held in major collections both in Britain and abroad including: Tate, The Government Art Collection, Arts Council England, The Victoria and Albert Museum, The Stedelijk Amsterdam and De Pont, Tilburg.