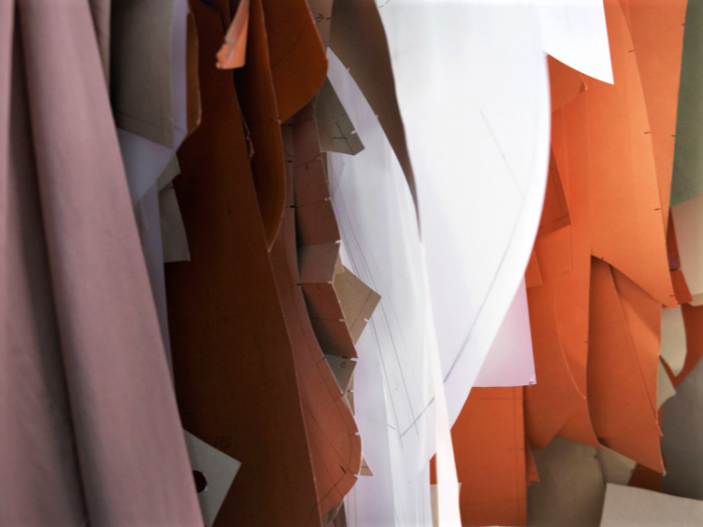 “I have always been interested in working models–more so than in the neatly finished models that the architect shows to the client, because there the design is already more or less fixed and the focus is on the formal elements. I like more the rough, working instrument that’s been handled.… The models I’ve made myself have no biography, no life story, but those working models do. They embody a moment in time, they show how you can think with your hands. That is what interests me.” – Thomas Demand –

The current exhibition at Sprueth Magers Gallery London includes new works from Demand’s Model Studies series. A departure in Demand’s own practice in its portrayal of models not of his own making, but to date those of architects John Lautner, SANAA and Hans Hollein.

In this latest series Demand focuses his attention on the atelier of the late fashion designer Azzedine Alaïa. For Demand, the model or in this case the pattern, is a sculptural object used to convey a series of ideas, a means of making sense of information.

Annotations, instructions and traces of tape and glue are visual markers of the labour that has worked to create them, bearing witness to their life of use. Shimmering tracing paper patterns testify to the practice of copying and reworking existing patterns.

The rigidity of the multi-coloured thick card patterns is in contrast to the seemingly haphazard means of presentation and operations of the atelier. Demand sees a similarity with these to Matisse’s paper cut-outs, abandoned leftovers on the studio floor that could become part of a work.

Unlike the architectural models of his earlier Model Studies, which may be used to trigger a seemingly endless chain of thought, Alaïa’s patterns are designed for use and reuse as a manual for the repetition of an idea in fabric.

Both these and those produced by architects are a working model, however, with an inbuilt history and biography. Demand continues to investigate how our interpretation of new and existing models can shape meaning, and in his pursuit of technical exactitude and sculptural form, studies the model as a way of rebuilding an impression of the world.

SARAH MOON PHOTOGRAPHY - PAST AND PRESENT