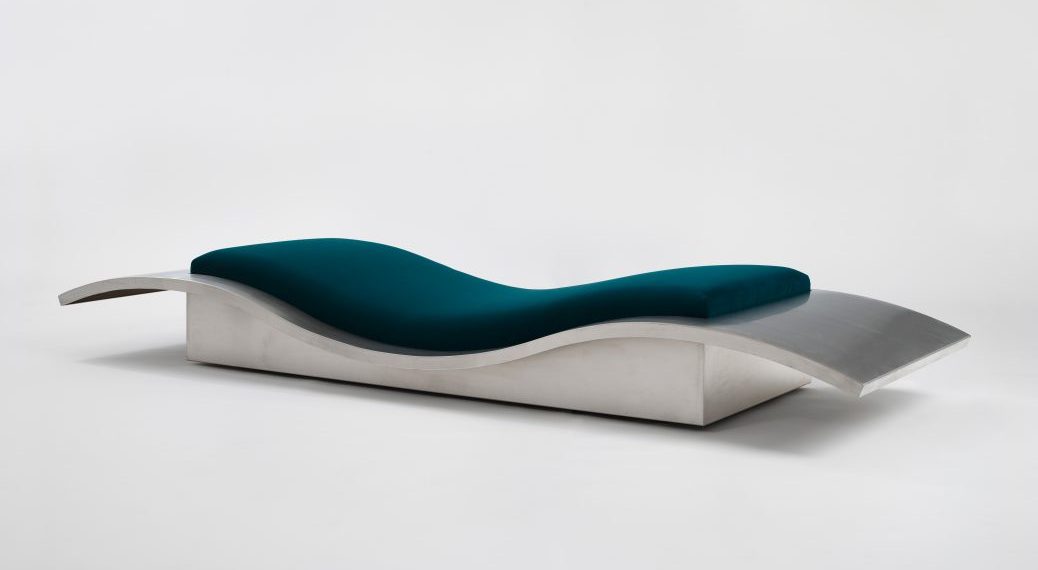 David Gill Gallery pays tribute to Maria Pergay who established her very own and characteristic style becoming an icon of taste by daring to work beyond accepted fashion.

A woman who thrives when experimenting with material, Pergay foraged a place in a world of design where trends did not reflect her instincts. Drawing from a multitude of influences, Pergay links the natural and fantastical to the industrious material of stainless steel. With each piece, her imagined world comes to life inside ours.

She has designed for fashion houses including Christian Dior and Jacques Heim, undertaken commissions for fashion designer Pierre Cardin, collaborated with Fendi and designed for The World Trade Center in Brussels. She redefined the use of stainless steel, earning it status as a central design material. At eighty-seven, Pergay continues to work according to her whims creating new and surprising pieces.

“Stainless steel does not forgive.
It has authority, and it helps me not to
make errors. But it also shines and glows;
it hints at greater things.”

A product of political turmoil in Europe in the early 20th century, Pergay was born in Moldavia, and forced to escape to France at age seven. Here, Pergay found sanctuary from the tragedies surrounding her by drawing. Though today Pergay shies away from referring to herself as an artist, her creativity and curiosity nurtured her through childhood. In 1947, Pergay began her studies at Paris’s Institut des Hautes Études Cinématographiques (IDHEC) specializing in costume and set design. At the same time, she attended the Académie de la Grande Chaumière in the Montparnasse neighborhood of Paris, an area known as a haven for creatives. Ossip Zadkine, a well-known painter and sculptor, taught Pergay during this time. This education primed Pergay to pursue creative invention.

Pergay’s career began when producing ornate metal elements for window displays in Paris’s fashionable boutiques. Her creativity piqued, she experimented with silver to produce a complete collection of distinct, contemporary pieces in the late 1950s.

After the Salon Bijorhca of 1957, Hermès and Christian Dior both embraced her designs. Pergay opened her own shop on Paris’s Place des Vosges in 1960 to promote her works. Within the first month of opening, she sold everything. As Pergay gained momentum, she became bolder in her experimentation. Elaborating upon a request by France’s foremost steel manufacturer to fabricate her small objects in their steel, her creative impulse erupted. In 1967, Pergay began to design full pieces of steel furniture, proving that an industrious, harsh material could be persuaded into supple and flexible forms. By 1968, she had designed her now iconic Flying Carpet Daybed. This piece challenged the divide between industry, nature, and fantasy, hybridizing an organic wave form, on a geometric rectangular base with whimsical narrative. In a bold move, Pergay brought steel to the forefront of French design, leaving its technical reputation in the past.

Every steel work from the larger series was displayed by Galerie Maison et Jardin, subsequently shown at the Biennale des Antiquaires at the Grand Palais in October 1968, then purchased by Pierre Cardin. By the 1970s, steel was not only a defining factor of Pergay’s work, but enlivened as a significant feature of French decoration, due to the influence of Pergay.