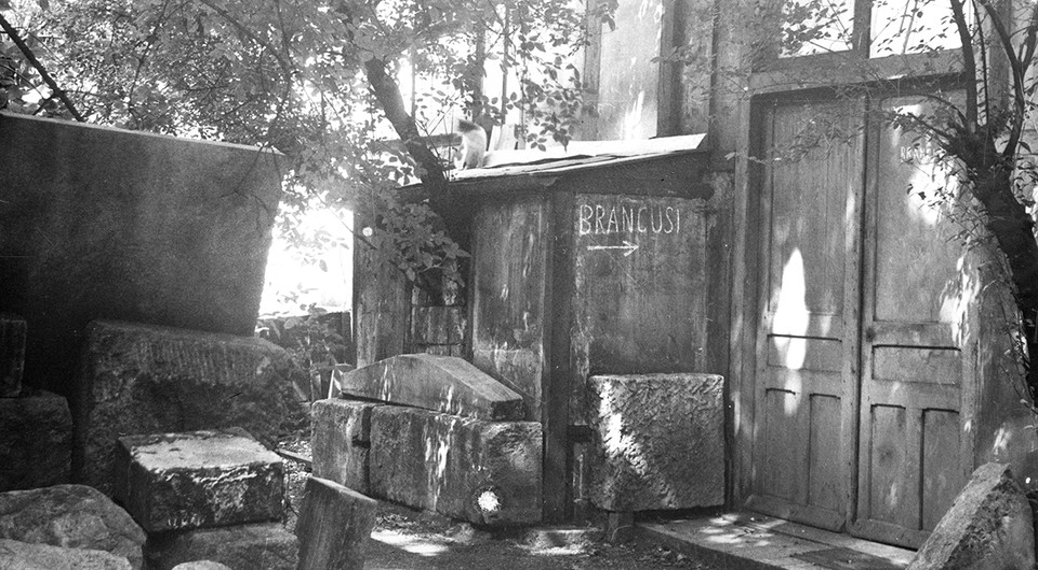 The idea of the show is not only to assemble work by these artists in an elaborate installation but also to embody the collaborative atmosphere of the Impasse Ronsin.
At the heart of the original Impasse Ronsin complex stands Constantin Brancusi, who moved into the alley in 1916 and would remain there until his death in 1957. During those forty-one years, a number of other well known names made the pilgrimage to this street in hopes of meeting the artist, whom Marcel Duchamp famously referred to as “The Queen Mother of the Impasse Ronsin”.

The exhibition features a bronze edition of Princess X, one of Brancusi’s most iconic forms, as well as a selection of the artist’s vintage photographs depicting the studio and its contents.  Brancusi’s studio as it was arranged at the time of his death was later meticulously reconstructed opposite the Centre Pompidou in Paris, where it has been open to the public since 1997.

From the 1930s through the 1950s, the Impasse Ronsin was an area closely associated with Dada and Surrealism. While neither had permanent studios there, both Man Ray and Marcel Duchamp were fixtures at the complex. Included in the exhibition is a vintage photograph of Brancusi and his dogs taken at the Impasse by Man Ray, as well as an original set of Duchamp’s “Rotoreliefs” and his film Anemic Cinema, 1926, in which they were used.

This Surrealist spirit would remain at Ronsin through the 1950s and 1960s, when artists such as Max Ernst and Les Lalanne would inhabit studios.  Max Ernst’s Dancers Under the Starry Sky, 1951, a painting aptly characteristic of this spirit, will be on view for the first time in sixty-four years.  Also executed in 1951 is William N. Copley’s Steroptic Nude, one of the artist’s most important early paintings and last exhibited in the artist’s 1980 retrospective at the Kunsthalle Bern.  The renowned collaborative duo Francois-Xavier Lalanne and his wife Claude Lalanne first met at the Impasse Ronsin in 1952, where iconic works such as Mouton de Laine and Choupatte were initially conceived, and which will be included in the exhibition.

More than anything else, collaboration and perpetual dialogue defined the Impasse Ronsin. In 1961, it was the locale in which Nike de Saint Phalle famously staged her “Shooting Paintings” with the help of Jean Tinguely, Yves Klein and Pierre Restany.  On view in Impasse Ronsin will be Tir (Fragment de Dracula II), 1961 – one of the most substantial and important works from the series.  Also included is Turning Friendship Model from the same year – a kinetic sculpture made by Larry Rivers with the help of Jean Tinguely.

In the rear gallery The Noguchi Museum will create an installation that evokes the ‘Brancusi-like’ studio Isamu Noguchi established just south of Paris, in Gentily, in 1927, after serving as the Romanian’s assistant. As the only artist to have come out of Brancusi’s studio, Noguchi’s insights into that Modernist Eden of ambiguity- where traditional craft met the avant-garde, object became indistinguishable from base, and art was life-are of particular interest.

The cooperative, convivial environment of the Impasse Ronsin has never been adequately articulated in the history of 20th-century art, but today, with sprawling artist communities thriving in Beijing, Berlin, Brooklyn, London, Los Angeles, Mexico City, etc., its story has never been more relevant.

BHARTI KHER LAYS OUT "THE LAWS OF REVERSED EFFORT"