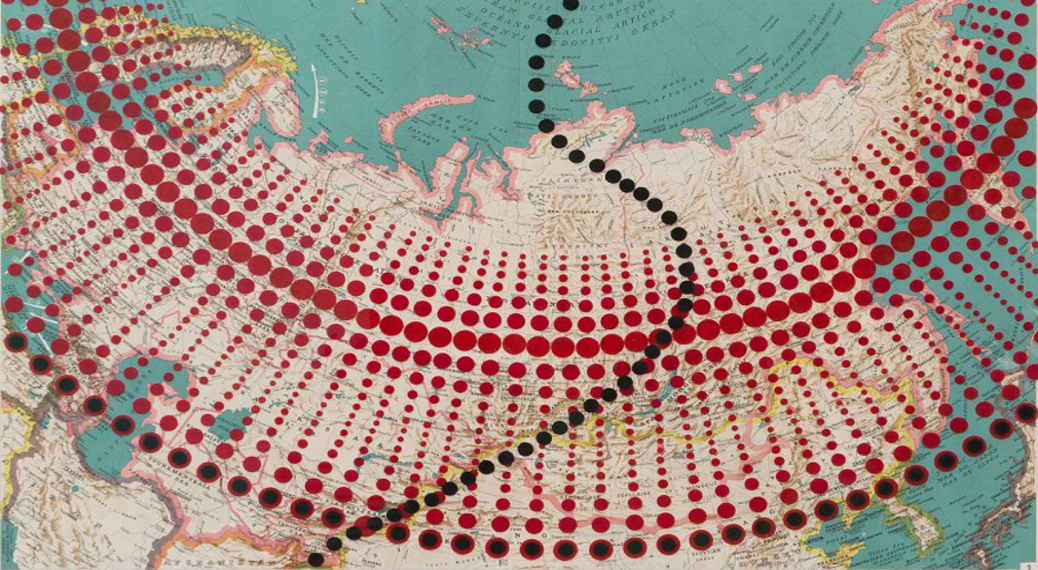 Bharti Kher returns to Galerie Perrotin with a prolific and varied show of new work that is comprised of sculpture, drawings, prints and installation. The presentation touches on a number of different issues and takes the he viewer on different registers. The range of materials may seem confounding but also fascinates because of the alchemical magic that she seems to tease and seduce from odd conjunctions and unfamiliar disparities.

There’s for example nothing seemingly extraordinary about the figures in her sculpture, “Six Women”: frontally nude, and seated, the contours of their breasts and stomachs nestle in mutual comfort, like the folds of time. Their bodies reveal few secrets. Kher has chosen the studio artist’s compact with his model of 19th century France, of the female nude, and the complex arrangements around the choice of model. Appropriately, she creates for her exhibition in Paris the prostitute as model – a popular subject in French academic painting, and a motif of the French Belle Epoque.

Kher’s figures have neither the ambiguity of romance nor the promise of pleasure and favoured haunts that excited the imagination of the 19th century artist. Unlike the “magical brightness of gas lamps” that Gustave Flaubert wrote of as the ideal setting for the prostitute, Kher presents her figures in the harsh reality of daylight. She identifies and draws her figures from Sonagachi in Kolkata, which translates from Bengali as tree of gold, South Asia’s largest area for pleasure seekers.

Her treatment of the nude derives from a body cast for each figure – and speaks of the act of trust and intimacy that lies at the core of the practice. Kher extends a more psychological dimension to another portrait. This is the face cast of her mother, “The half spectral thing”. Laid on its side, the features somewhat obscured, the work does not quite belong to the genre of artist’s mothers portraits. Rather, rendered as homage and somewhat ghost like, separated or severed from the body, the facial cast comes in the line of her recent enquiry into casting the body as memory, and the mind as the seat of emotion. Seen in context with the “Six Women”, this work puts the onus on the older female body, and its summation of experience as a subject of study.

For some years Kher has been working with what she speaks of as double sided cabinet forms. Comprising free standing frames in heavy wood, these present a ground for the most radical work that she is now attempting with the bindi. As a dot of ornamentation worn by women in the subcontinent, she has turned it into a mark that can assume a dynamic, painterly effect and a personal language. “The Betrayal of Causes Once Held Dear” sees the bindi as vast painted surfaces playing host to cosmic forms as they appear to spin in orbit.

In these large reflective works, Kher extends her interest in translucency, the mirror surfaces and the body. She refers to these as “obelisk bodies that carry the seven epidermal layers of skin and memory”. On the verso she introduces a new material, wax, which touches on the makings of alchemy and transformation. Christian poetry and Biblical metaphor are rich in reference to the act of purification through burning and the separation of the dross and the gold. Kher opts for the more humble material wax, the only element which recoups its original form even after heating and cooling. Here her work recalls Cy Twombly – in the relationship between word and image, drawing
and the effect of a dripping surface, the “ecstasy and insanity” that Twombly spoke of.

Kher complicates the bindi works by making them repositories of desire through the use of a highly personal language. In “What Can I Tell You That You Don’t Know Already?” (2013) – mirrors, bindis and stainless steel are like landscapes, pressed flowers, and memory fields. Using the black dot/bindi, Kher also creates minimal, illusionistic abstract fields with “Heroides V” and “Heroides VII”. The reference to Heroides is to the letters of classical heroines in Ovid written by neglected or abandoned heroines to their lovers ; the women of Lesbos, Dido, Phyllis and Penelope are all believed to be the subject of the Heroides.

"IMPASSE RONSIN" _ DOCUMENTING THE LEGENDS OF AN ALLEY