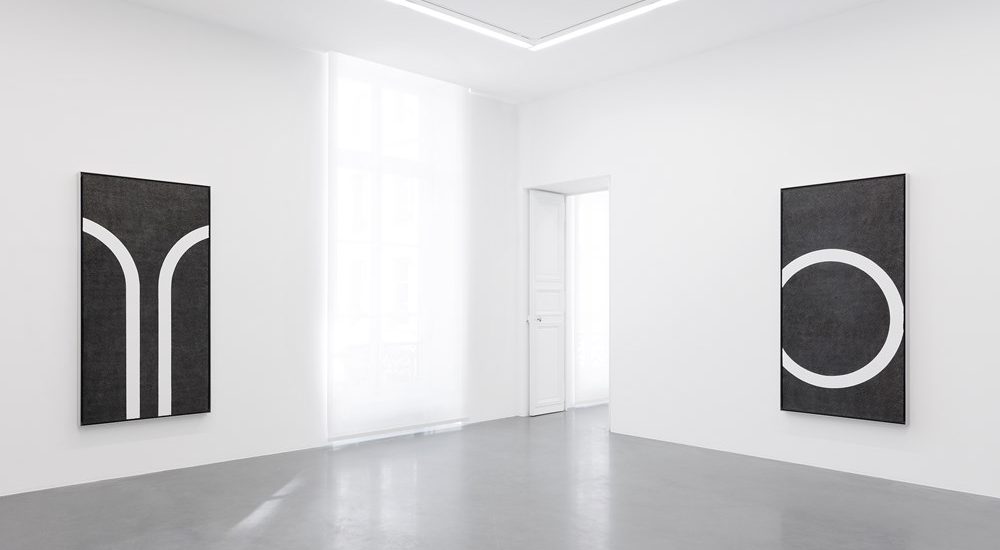 Michael Elmgreen and Ingar Dragset have worked together for more than twenty years, in a wide range of media. They create  sculptures and installations that often echo early land art or Minimalist aesthetics, but engage with current, social, and existential issues surrounding both public space and everyday designs, and how these influence our behavior and mindsets. Their new body of sculptural works continues the artists’ ongoing interest in how we interact with spatial contexts.

In a new large-scale installation at Galerie Perrotin, Paris, the entire room seems to have chewed up an expanse of urban streetscape. The massive, broken shards of asphalt stack up like the wreckage left in the wake of an arctic icebreaker and recall both Caspar David Friedrich’s The Sea of Ice (1824) and early land art projects by Michael Heizer and Richard Long.

Their flat black surfaces are embedded here and there with the remnants of common street fixtures—the anchor pole for a lost traffic sign, twisted metal that may have once been a bike rack. These tools that once were used both to limit and to encourage social use of public space are now gone or at least useless. But what happened to them, who is to blame, and what comes next are questions left for the viewer to puzzle out.

Examined in strictly formal terms, this composition in black, grey, and silver has a unified beauty. Yet it is just as undeniable that viewers would feel inconvenienced if they encountered a similar—albeit probably less pristine—stack of debris on the street. Through the artists’ finely-tuned design decisions, we as viewers are able to perceive this image of dysfunctional public space in a dangerously pleasing manner.

The installation not only raises questions about our shared public spaces, but also about the setting of the gallery itself, by displacing the broken pieces of the street and presenting them within the bourgeois grandeur of the private gallery room.

The contemporary white cube figures quite literally in the exhibition’s next work, a polished stainless steel street sign with no instructions or warnings to be found. Titled “Adaptation”, this new series of mirrored signage reflects the spatial context: instead of a warning or a direction printed on the sign board’s surface, the viewer will see the image of him- or herself in the space. The street sign is here reduced to pure form, which adapts to its surroundings rather than being a tool for controlling and directing.

On the second floor, several rectangular fragments of asphalt are displayed, each framed and mounted on the wall as paintings or reliefs. Parts of what seem to be street markings in white paint can be discerned, however upon closer examination, it becomes apparent that the designs do not indicate any instructions at all, or that they signal unrealistic or even absurd directions.

A circle appears on one piece, for example, whereas on another, two parallel lines begin to arch away from each other, making the symbols less like the traffic rules of the road and more like geometric abstractions. By isolating and exhibiting these fragments, the artists draw attention to and subtly alter some of the most common visual aspects of public infrastructure that are usually designed purely to communicate law and order.