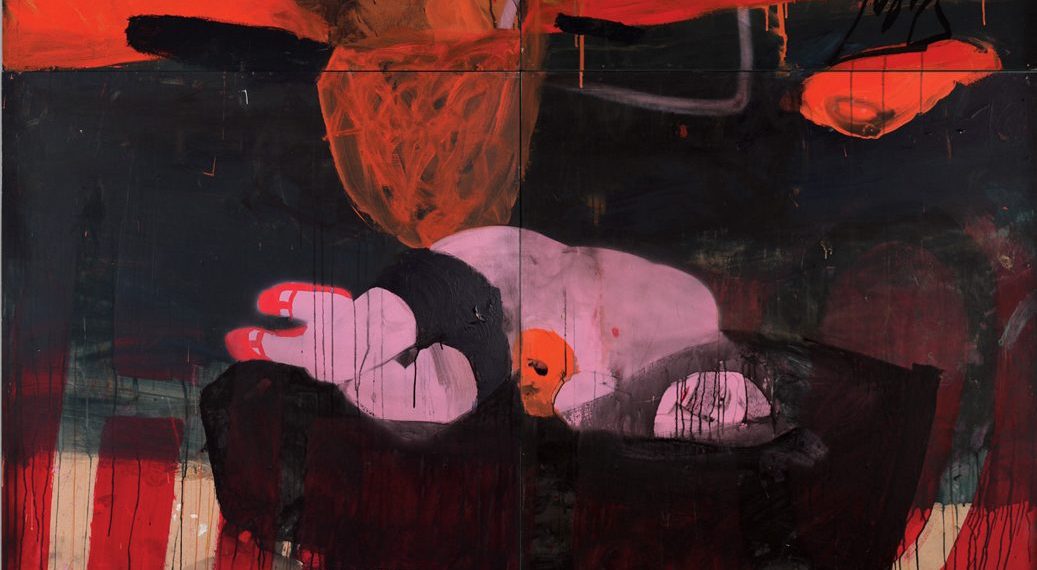 Tell your story. Samuel Bassett dares to get personal in his paintings and adds the occasional autobiographical note while channelling his environment through depictions of individuals and groups negotiating their real and emotional spaces.

Simultaneously, the works maintain a painterly detachment and seem to stand as a general chronicle to a life’s journey and its daily encounters. With candor, humor and distinction he recounts the traditions of his Cornish home town, St. Ives, as well as his broader family background.

Themes of boats and fishermen are found side by side with scenes of contemporary leisure life questioning the way and pace of change of our surroundings and the individual’s capacities to cope with its existence between past and future.

“Art that has soul, something very human
and is conceptually sound as well as visually interesting.
[ …] Art that’s made with the hand, the eye
and the heart.”

Bassett’s paintings, while steeped in figuration, have an internal logic that also nods to Abstract Expressionism – they are built from wide expanses of color which lock the surfaces of the paintings into cohesive planes of thought. His color palette is confident with blocks of moody pinks, deep blues, hot reds and oranges – here and there broken up into scruffy fields with chunky lines, amorphous shapes and bisecting marks.

With their strong colors the paintings feel lit from within and give the sense that each is its own realm, operating with distinct values and individual gravity. The figures float, lean or overlap reflecting the layers and modifications left by Bassett for the viewers to have their imagination follow those narrative notions spread out on canvas or wood.

Bassett’s figures occupy spaces less as individuals but as symbols of humanity. They often seem lost in some sort of social predicament, uncertain of what’s going to come: days of leisure by the shore may either be happy or weighted with fear and suggestion.

His characters are almost featureless, but identity is then signaled through curious and playful depictions of allegories – sometimes painted with hints of humor sometimes with a touch of pathos or melancholy. What makes these paintings so special is that they would never teach or preach, but simply offer themselves as residue of psychological introspection. Born in 1982 in Cornwall, UK, Samuel Bassett studied in Bournemouth, lived in London and finally relocated to his home town of St. Ives to focus on his art. There he continues to work in the prestigious Porthmeor Studios located above his grandfather’s former net loft. The studios were previously occupied by Francis Bacon and Ben Nicholson among others who formed the St. Ives Modernists.

St. Ives has also been his family’s home since 1695. The artistic traditions of the town, and from within his family fisherman by trade and artists by heart, this place continues to influence his artistic development and further his artwork with physical and emotional support today.

Until 17 November Samuel Bassett’s work can be seen at Galerie Kornfeld, Berlin.  Founded in 2011 the gallery’s program ranges from young contemporary positions to pioneering artists of the avant-garde and beyond. Showcasing a mix of emerging and established artists as well as estates, Galerie Kornfeld considers contributing to a contemporary discourse as one of the major aspects of its overall mission.

In addition 68projects has been operating as a busy offspring of the main gallery since 2014, conceived as a project space which is primarily dedicated to a diverse curatorial exhibition program with residencies for emerging international artists throughout the year.