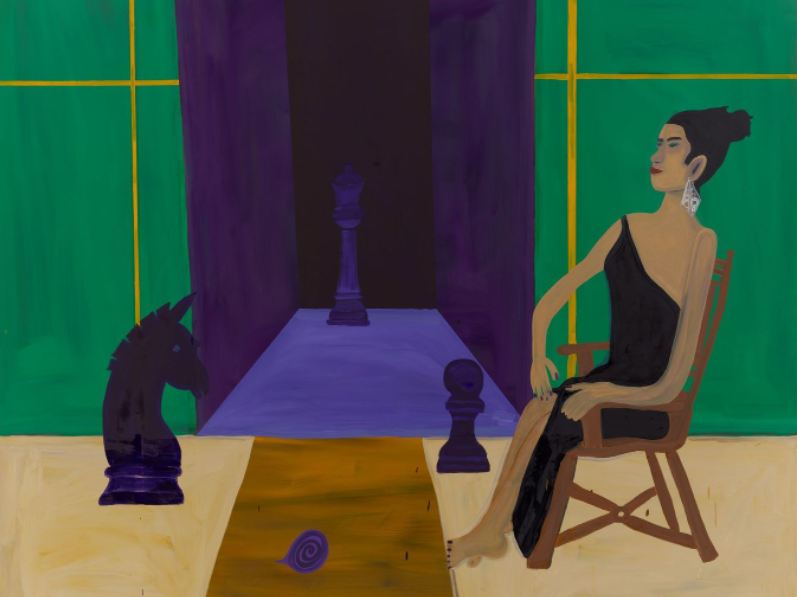 In Marcus Jahmal’s new paintings, purple hurtles along the continuum of human history. The figures that populate his washy fields wear little clothing or nothing at all, a self-abnegating refusal of millenia of class structure. They have become purple itself, their skin pulsating violet, as if emanating light.

Jahmal’s color sense is finely tuned, taking something of the rabid passion of the Fauvists and the emotional immediacy of the Neo-Expressionists (there are other overlaps, too: a rejection of three-dimensional space, for example). On the chromatic spectrum, purple exists somewhere between the tempestuous fury of red and the calm cool of blue. It takes both humors and makes its own. Purple vibrates at the uppermost length of the visible spectrum. Travel any further and you’ve left the physical realm. You can do that in a Marcus Jahmal picture, too.

Elsewhere, visions of the cosmos come into view. Constellations share space with orbiting skull-shaped planets, their colors searing on top of a thickly applied field of purple infinity. The same view folds in on itself, seen through the window of a room, its walls bathed in purple light. Jahmal says that when he looks up at the night sky it reads more purple than dark blue or black: “Somewhere between the two purple spaces, perhaps there is a crossover.”

He’s painted a lot of ladders and staircases this time, both being, historically, a bridge between heaven and earth, or between life and death, or between consciousness and a half-remembered dream. If this feels reductive, if Jahmal’s pictures recall the insistent drawings of children, maybe it’s because Jahmal understands it’s useful to see the world the way a child does: for the first time, uncolored by strife. This world is allowed to be purple-hued in its splendor. Only its most essential parts matter. – Max Lakin –

Marcus Jahmal (b. 1990) lives and works in New York. He was raised in Brooklyn’s Prospect Heights neighborhood, growing up in a family with roots in the West Indies and American south. His paintings synthesize a diverse range of inspirations and autobiography, drawing from photographs, ancient rituals, and personal memories.

Jahmal’s works move fluidly between genres spanning architectural interiors and still life, as well as landscape and portraiture. Developing his compositions directly upon the surface of each canvas, Jahmal coaxes imaginary, yet uncannily familiar, scenes to life, exploring themes encompassing dreams and folkloric Americana, and the contemporary realities of gentrification and city dwelling.

As Jahmal explains, “most of [my] figures have a personality and a link to real life; I’m interested in a kind of filtered realism”. Skulls, anthropomorphic creatures, rolling landscapes, thieves, card players, and policemen, occupy spaces that feel steeped in a collective memory at once primordial and precognitive of some future world where polymorphism reigns and metaphors are fluid. Marcus Jahmal has exhibited widely in the United States, Europe, and Asia. His inaugural monograph, Solid Ghosts,was published in 2018, and he has been the subject of a recent institutional solo exhibition at the Passerelle Centre d’art contemporain, in Brest, France.

THOMAS SCHEIBITZ - SIMILARITIES AND IMITATIONS OF THE VISIBLE