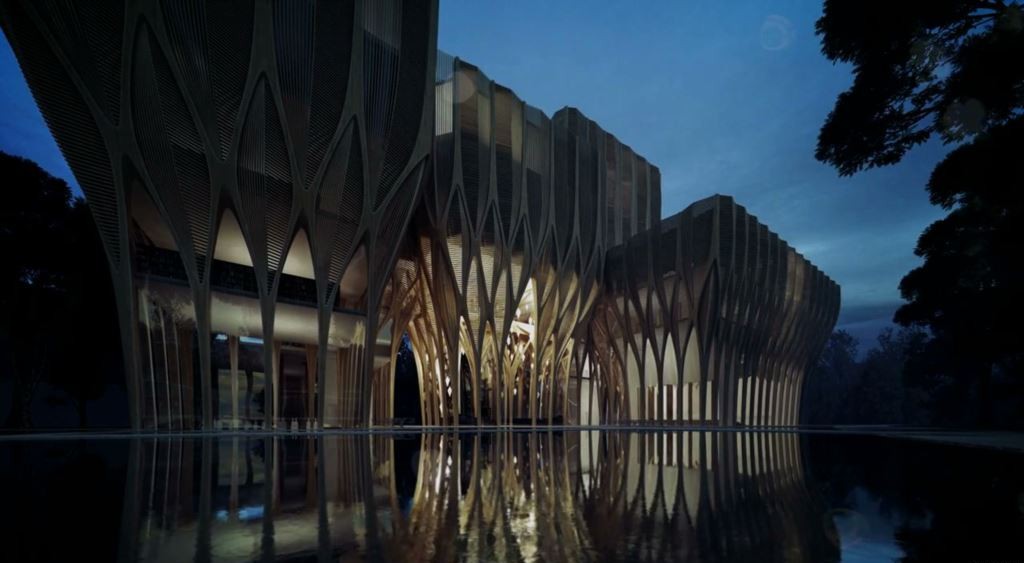 The vision of Youk Chhang, a human rights activist and investigator of the Khmer Rouge atrocities, the Sleuk Rith Institute was founded by Chhang as a focus for reflection, healing and reconciliation as well as an enlightening educational and research facility dedicated to commemorating the lives of the past by building a better future. Looking like a futuristic descendant of Angkor Wat, with a cluster of chiselled forms poking up above the trees, Cambodia is to receive a new genocide museum and research institute, designed by London-based Iraqi architect Zaha Hadid. Unveiled 35 years after the end of the Khmer Rouge’s brutal reign, the Sleuk Rith Institute will incorporate a museum, research centre, graduate school, document archives and research library, set in an expansive new park south of the centre of the capital, Phnom Penh.

“We have to live with a long, dark shadow,” says Chhang, who lost his sister, as well as aunts and uncles, to Pol Pot’s reign of terror. “We cannot escape it, but we shouldn’t be enslaved by it. I want the institute to bring something new and hopeful, and get us out of the mindset of being victims.”

The complex is planned to serve as a centre for genocide studies across Asia, with a strong educational and outreach component, and shares its site with a local high school – formerly home to a Khmer Rouge re-education camp. The land has been donated by the Cambodian government and a $35m fundraising campaign launched, with some funding already committed by USAID, sponsor of DC-Cam’s work to date. Over the last two decades, Chhang and his team have compiled an archive of over a million documents, photographs, tapes and films, as well as mapped 200 prisons and 20,000 mass graves across the country. From confidential reports describing conditions in the countryside, where a million died of starvation, to confessions under torture of thousands of prisoners killed by the secret police, the archive provided essential evidence during the trial of two former Khmer Rouge leaders, Khieu Samphan, 83, and Nuon Chea, 88, who were finally convicted of crimes against humanity in August this year.
.

"THE TALE OF TOMORROW" NEW RELEASE BY GESTALTEN

"COLLECTIVE INTUITION" A TRIBUTE TO SNOHETTA