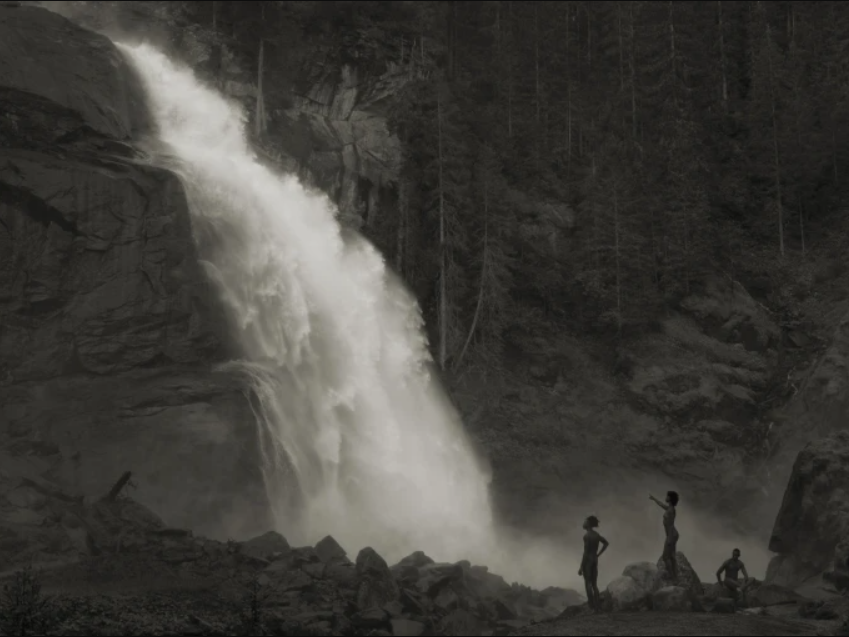 “Im Wald” – In The Forest – is a new series by Dutch photographer Erwin Olaf, and it is the first of his series to be photographed purely on location. The series is set in the beauty of the Bavarian and Austrian Alps and draws attention to several global issues, including climate change, wanderlust, immigration and more – directly investigating nature’s impact on our lives.

Olaf highlights the role of people in isolation, staging them in visually astounding settings and examining their relationship to nature. Both the vastness of the landscape by comparison to the subjects, but also the subjects’ empathy with the natural environment, are dramatized by the scale of the images.

Several of the works are inspired by the artistic movement ‘Romanticism’. The genre which peaked in Northern Europe, in particular Germany in the 19th Century celebrates the individual, human emotion and the wonder of nature. In one of Olaf’s images, we see a young boy standing in front of a colossal valley. In awe of the grandeur of nature, he remains entirely still, blending into the mist around him. The work is a direct reference to the iconic German Romantic painting ‘Wanderer above the Mist’ (1817) by Casper David Friederich. Like in this painting and others of the time, the subject hovers between a sublime future and an overwhelming present.

In this series, Olaf does not want to compare current events with the past but raises questions about the present and the future. He positions his protagonists in the here and now, with props like a plastic bottle, headphones, selfie sticks, and hygienic masks. Yet Olaf achieves a universal and timeless quality by shooting the series in monochrome.

The artist consciously chose a black and white palette for this series, to emphasize the brute force and indifference of our world. For this aesthetic, he was inspired by the landscapes of the American pioneer of “straight photography” Ansel Adams (1902–1984). The monochromatic tonality also contributes to the feeling of disorientation within the vast expanse of the forested landscape. The exhibition features four museum scale landscapes alongside intimate portraits of the subjects within them.

Erwin Olaf gained worldwide recognition for his highly stylized and meticulously choreographed photographs, videos, and installations. Influenced also by his own travels and accompanying feelings of transience and anomie, Olaf’s models often gaze into the distance and evoke an uneasy, disconnected sense of mystery. Their cinematic nature reflects Olaf’s evolution as an ar tist, leaning towards a more complex narrative.

Olaf started his career by documenting 1980’s nightlife, but soon explored his own series and subjects in both black-and-white and colour. He now shoots tableaux style images, adopting the role of both director and photographer, opting for a cinematic style embedded with stillness which seeks to express the sitter’s genuine emotions and neuroses.

The artist’s bold and theatrical approach to photography has earned him commissions from Louis Vuitton, Vogue, and the Rijksmuseum amongst many others. Erwin Olaf is today one of the leading living contemporary photographers in the world. In addition to many international awards over the course of his career, his work is held in many private and public collections internationally including, amongst others, the Rijksmuseum in Amsterdam, the Fonds National d’Art Contemporain in Paris, the Museum Ludwig in Cologne, the Pushkin Museum in Moscow or the Art Progressive Collection in the United States.