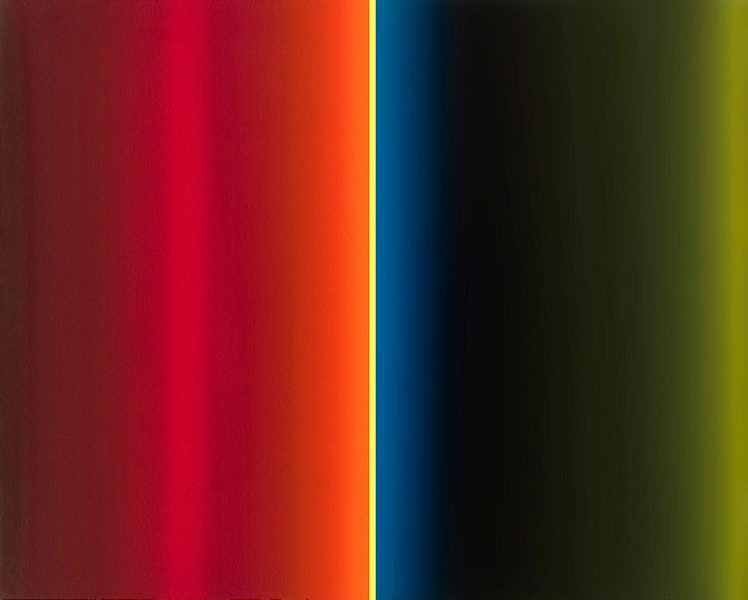 Spanish painter Francisco Suárez is currently on show at Galería Victor Lope, Barcelona, presenting his recent series Lumen – a refined and singular conception of geometric abstraction. Without abandoning the characteristic rigour and measure of his work, these pieces appear as a revelation, for between their layers of colour an inherent glow would seem to emerge from the canvas.

Since it is the very unit of luminous flux that names the series, his works could not be conceived in any other way than by giving light the leading role. As the cornerstone of the composition, Francisco Suárez recreates powerful light effects through a vibrant use of colour, from which the work rises.

The artist thus manifests a perfect conjunction between chance and control, the result of a refined technique that seeks to preserve the most characteristic warmth of informalism and transfer it to the realm of abstraction. In this way, we can perceive an intention to leave a mark, to influence the viewer’s gaze to the point of placing it somewhere close to meditation.

«Like someone who gazes into the flame of a candle, we become absorbed in the very act of looking, waiting for the vision to be transformed into contemplation of our inner self, of time and existence. We enter the territory of emotion.»

The work of Francisco Suárez focuses on emphasizing the autonomy of painting, the physical and perceptual presence of the pictural object. Each work is above all a statement about itself, the chromatic and visual stimuli that form it, the numerical relationships that compose it. But a work of art is not a mathematical equation. In contrast to the coldness to which the geometric can lead, his work preserves a certain mysterious impulse of what arises spontaneously in the act of painting.

His artworks acquire a special vibration and an absence of rigidity that facilitates interaction with the gaze. Undoubtedly, the attractiveness of his work is also due to an exquisite use of color. He does not want to produce a cold and cerebral structure but to obtain seductive presences, in which geometric purity serves as a vehicle to access the field of self-knowledge, a state perhaps close to contemplation.