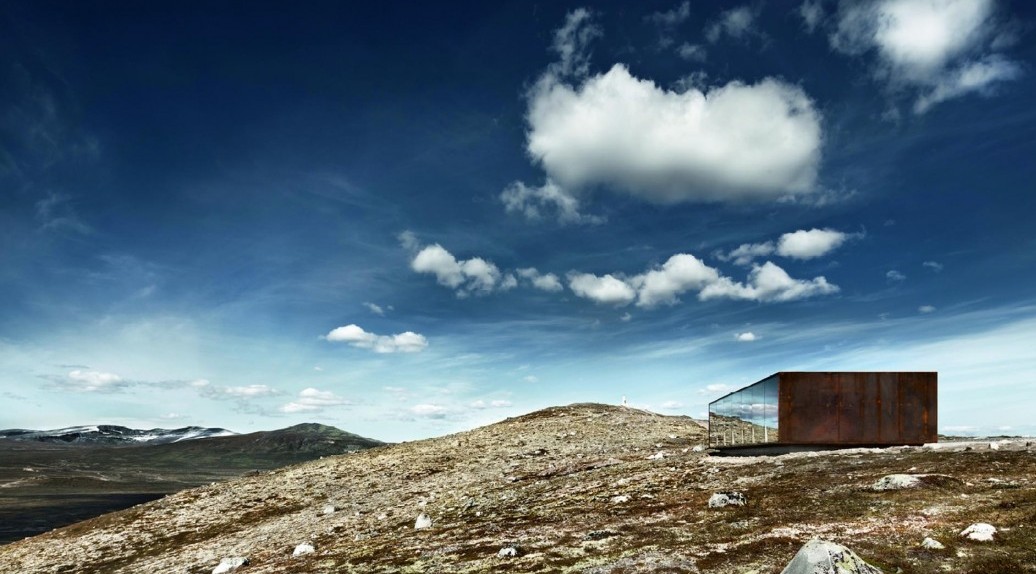 Berlin based photographer Ken Schluchtmann is known for his signature style. Clear and cool , his im­ages are taken without the use of artificial lighting — at dusk or beneath a cloudy sky—lending his subject matter a sensual quality. The World Architecture Fes­tival in Singapore recognized his outstanding work, naming him the architecture photographer of the year in 2012 and 2013. To produce the photographs for this book, an independent project, Schluchtmann traveled over twenty thousand kilometers, passing through dramatic landscapes and profiling the inno­vative architecture projects commissioned by the Norwegian government in recent years along the country’s National Tourist Route.

We follow this route along the wildlife ob­servation station at Dovre National Park designed by Snøhetta, and on to the dizzying views provided by Reiulf Ramstad’s terraces at Trollstigen. We admire and pass the Steilneset Memorial by Peter Zumthor and Louise Bourgeois, which commemorates the victims of seven­teenth-century witch trials and head on to the next awesame place.

Schluchtman finds a unique visual language to convey Norway’s vast archaic landscape and the architectural designs embedded in it. Large tracts of land, especially in the North of Norwy and in the highlands, remain uninhabited and distances are immense. The long coastline, mountains and islands and prevailing extreme weather conditions though give the country and its landscape a unique wild character.

Both architectural connaisseurs and the nature inclined are fascinated by the elegance and subtleness of modern buildings that have emerged over the past years merging the aesthetics of landscape and design. Schluchtmans photo book that has been recently published by Hatje Cantz is the perfect guide to discover hidden treasures of extraordinary beauty.