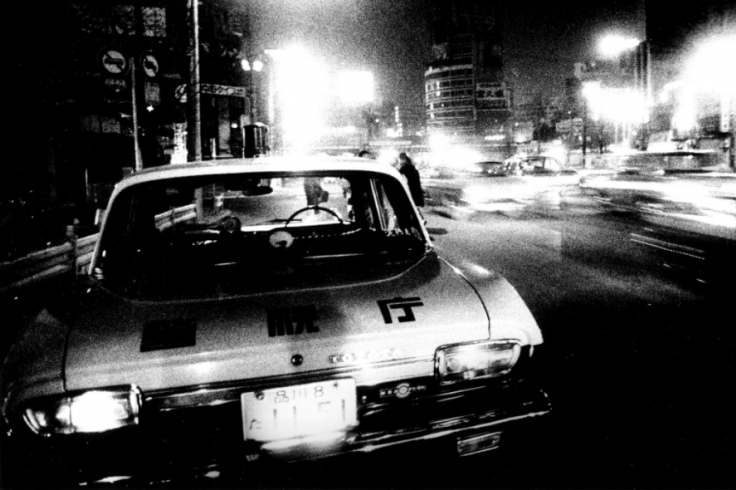 Staging this historic exhibition was the dream of two great photographers and friends. Through a major overview of the works of both Moriyama and Tomatsu, Moriyama – Tomatsu: Tokyo highlights a shared fascination with the Japanese capital that both artists spent decades exploring.

The Maison Europeenne de la Photographie (MEP), Paris, celebrates the extraordinary oeuvre of the two artists introducing them for the first time to a broad European audience. The show was curated in close collaboration with Daido Moriyama and Tomatsu’s widow and collaborator, Yasuko Tomatsu, the exhibition is drawn from the two artists’ initial list of works – enriched and adapted for the occasion – in a comprehensive and coherent journey through their lives and work.

A new three–volume catalogue has been published in both French and English by Akio Nagasawa to accompany the exhibition. This publication, with an introduction by Simon Baker, also contains previously unpublished translations of key texts by Moriyama and Tomatsu.

Shomei Tomatsu’s Tokyo – Among the images of Tokyo selected for the initial project, 140 of Tomatsu’s works have been chosen for the exhibition at MEP. The journey through the exhibition begins with the artist’s first photographs after his arrival in Tokyo in 1954. At that time, Tomatsu had developed an interest in the lives of ordinary people in Japan: a country still suffering the aftereffects of the Second World War.

As early as 1958, fascinated with the Americanization of his country and its impact on the Japanese way of life and culture, Tomatsu began to photograph American soldiers on military bases in Japan, culminating in his landmark project “Chewing Gum and Chocolate”. Tomatsu also had a strong interest in the new ways of life that emerged in the post–war years. In the “Chindon” series, for example, he focused on the poor actors and musicians called chindon’ya who, dressed in their traditional Edo–period costume, became advertising models for department stores.

With “Asphalt”, another key early series, Tomatsu experimented with form, revealing previously unimagined worlds. He devoted a whole series of photographs to asphalt in the streets, which he viewed as the “skin” of the city, in which fragments of metallic objects encrusted in the tarmac looked like star dust.

Already by the 1960s, Tomatsu had begun to work with colour photography and this aspect of his practice – present throughout the exhibition – features more prominently as the years pass. In some works from the early 1980s, like Cherry Blossoms, Tomatsu works with scale and proximity, magnifying details of the hugely symbolic Japanese flowering cherry trees. At the end of Tomatsu’s exhibition, we see the baton passing to the generation of photographers he inspired with remarkable colour portraits of the flagship photographers of late 1970s in Japan: Nobuyoshi Araki, Masahisa Fukase, Moriyama (who appears disguised as a Japanese bride) as well as a brilliant costumed self–portrait of Shomei Tomatsu himself.

Daido Moriyama’s Tokyo –  Designed by the artist himself in close collaboration with gallery owner and art publisher Akio Nagasawa, the selection of works and the scenography of Daido Moriyama’s installation highlight both his most iconic series and the great diversity of his practice: silver prints, colour photographs, silkscreen prints, Polaroids, wallpapers, light boxes, books and magazines including the magazine Record, which Moriyama has published periodically since the 1970s.

The exhibition starts with images from the artist’s first book, Japan: A Photo Theatre (1968), in which he mixed street photographs and portraits of traveling actors. The book would go on to cause a scandal, with an aesthetic very similar to that of the magazine Provoke, to which Moriyama contributed in 1969. The same year, inspired by Andy Warhol’s “Death and Disaster” series of silkscreen prints which he discovered in 1968, he shot his series “Accident”, distorting photographs of brutal night–time road accidents found in magazines, on television, and even in pre–existing road–safety campaigns, appropriating them for his own work. This part of the exhibition also features large-format silkscreen prints on canvas, again inspired by Andy Warhol’s practice, which Moriyama considered to be a natural extension of his own photographic language.

After a break in his photographic practice, Moriyama produced the book Light and Shadow, in which he asserted a new approach, this time with high–contrast still–life images in smooth dark tones and tight compositions which would build his reputation in the years that followed.

"An Eclipse of Moths" - Gregory Crewdson