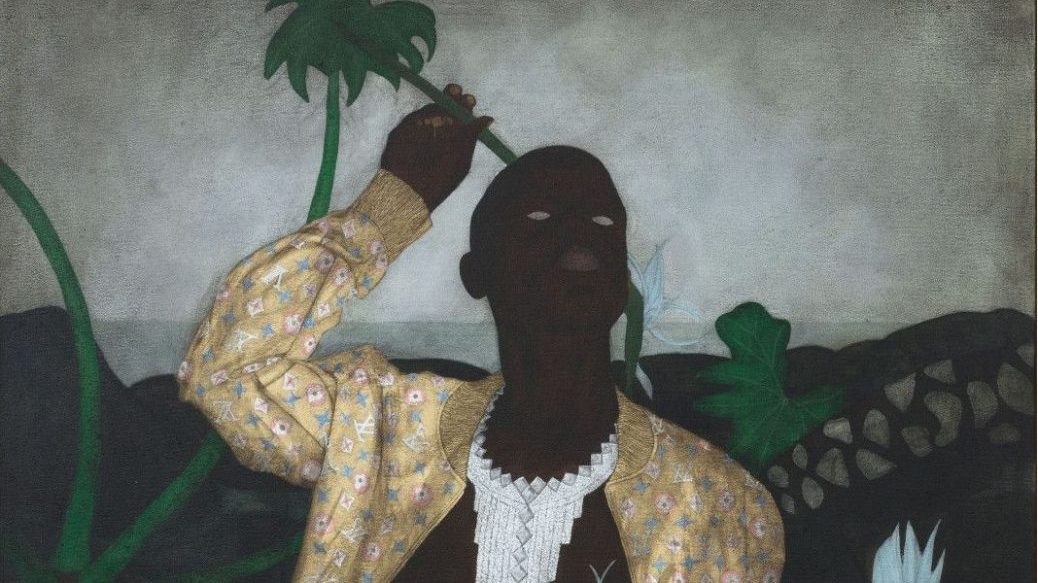 Originally a photography student, it was fifteen years ago that Cinga Samson began to pursue fine art painting. This medium shift was inspired by two factors: his discovery of the Isibane Creative Arts studio and his mother.

In 2006, he stumbled into Isibane Creative Arts in Khayelitsha, Cape Town – an art studio that was home to artists whose work explored black life in the townships. The group took Samson in and under their tutelage he began to experiment with paint – initially mimicking the group’s different styles, and eventually authoring an artistic language of his own. His mother also played a large role in his transition towards painting.

The artist recalls how, when he was young, his now late mother would plant a hedge of Cannas along the fencing of their house, and how this flower acted as inspiration for nearly all of his initial works. As the painter matured, the still life flower gave way to more figurative works. The works, often depicting African men in stylized poses – sometimes languid and divested of energy; at other times erect and confident, staring out of the canvas with eyes painted white – recall old portraits African men would send home to reassure loved ones of their prosperity.

Historically, these men were driven to mining towns, such as Johannesburg or the harbor in Cape Town, in order to earn money for the hut tax imposed by the Cape Colony on black Africans. In these portraits, later captured in popular black magazines in South Africa during apartheid, one would find up-rooted men spiffily dressed, showing off their newfound status through clothes and shoes – frequently alongside a fern or a tree.

In the portraits, it was not un-common to find men smiling, exuding confidence in their youth. However, in Samson’s work, this smile is lacking. Instead, what one finds is something darker and more haunting, like a Shakespearean apparition or spirit. And yet, the painter finds beauty in the haunting figure. This beauty is universal, encompassing all life, whether human or natural. However, he insists, it is not an innocent beauty, a beauty devoid of risk: “With the impressionists, for example, everything is beautiful without risk. Everything’s saturated with light. But I’m not interested in that. I want to do work in which there’s risk implied in what’s deemed beautiful. It’s the same with people.”

Throughout the exhibition, Samson depicts men and women posing together at the Rhodes Memorial in Cape Town. Cecil John Rhodes was a British Imperialist and mining magnet who has been at the center of discourse around decolonization. His statue was removed from Cape Town University, following a protest that subsequently sparked wider discourse around the decolonization of education across South Africa.

Samson says, “My own thinking was that we are going to shoot at night and we’re going to haunt this space… this legacy. We’re going to haunt Rhodes. I wanted us [black people] to look good in that space, to feel like we own it, like we belong – the way our ancestors might have felt.” The title of his latest series and a recent exhibition at Perrotin Gallery, New York, “Amadoda Akafani, Afana Ngeentshebe Zodwav (men are different, though they look alike” – are words from Samson’s father. His father had expected him to pursue a profession that would be financially stabilizing. Considering the legacies of colonialism and apartheid – the vast inequality that dogs South Africa to this day and the transience of black life – his father’s concerns weren’t without cause. His father, the artist says, said those words to affirm him and his choices, to affirm his individual humanity and his decision to pursue art.

"LAND OF DREAMS" NEW PORTRAITS AND INSTALLATIONS BY SHIRIN NESHAT