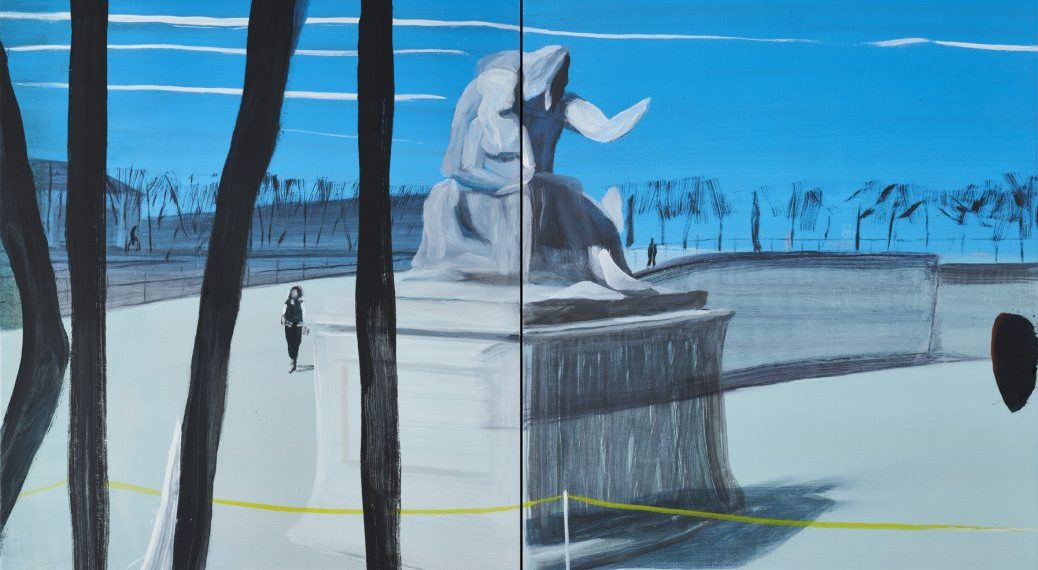 “Jardins Obscurs” is the title of Marc Desgrandchamps second solo show at Galerie Lelong Paris. Taking his inspiration from personal photographs or striking memories of scenes from films (such as the large garden that surrounds the house in Melancholia by Lars von Trier), this time the artist is using more contrasted tonalities.

In other paintings, the viewer will find fugitive silhouettes, transparent against blue backgrounds, which remind us of older works that were visible in the artist’s exhibitions at the Centre Pompidou (2006) or the Musée d’art Moderne de la ville de Paris (2011).

His works on view are partly reminiscent of mysterious outdoor scenes, free of any human presence, where a dark green colour dominates in a dusky atmosphere. Desgrandchamps idiosyncratic style has developed over the last twenty years and relies mostly on photography and cinema.

At their inception, his references were ancient and modern paintings from museums, from Poussin to Beckmann, right through to Malevich. Over these he superimposes film stills, photographs taken during his travels and sometimes images clipped from the press. Their essentially figurative and realistic character means that his paintings are no exception to the principle of migration of forms and attitudes set out by Warburg. A passer-by recalls an antique relief or a figure on a vase.

These almost academic references to the art of the past are enriched by cinematic references, holiday photos and probably childhood memories. And this process of representation has become more complex over the years, opening up new subjects with every period’s technical changes.

Marc Desgrandchamps was born in 1960 and lives and works in Lyon. In 2017, his painting was the subject of an exhibition at the Musée des Beaux-Arts in Caen and in 2019 in the Centre d’Art Nomade in Toulouse. Galerie Lelong & Co. published three new lithographs entitled Latona, in 2018.