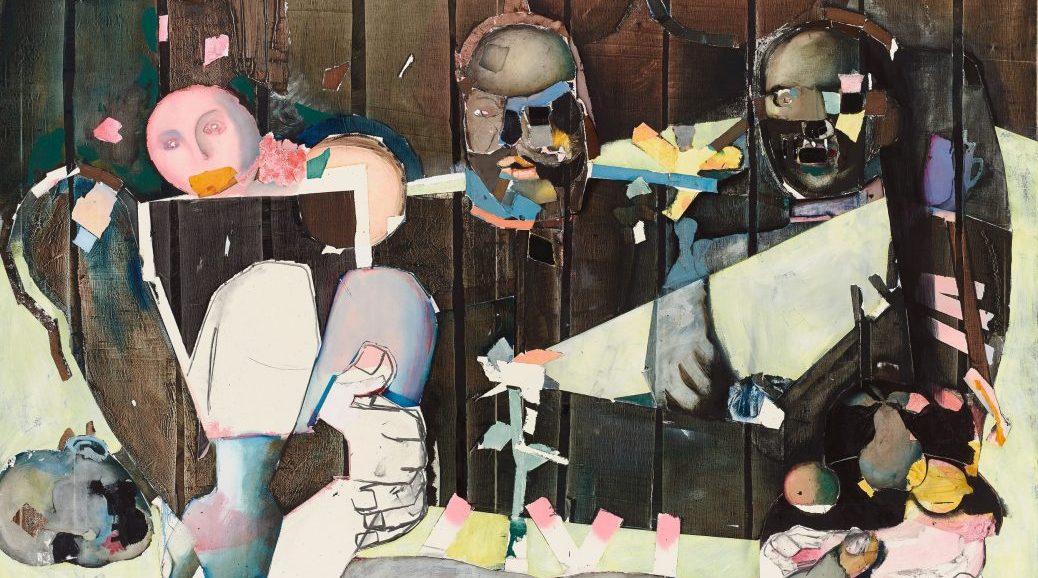 Magnus Plessen creates works that combine diverse painterly methods and approaches to reality (systems of representation) within an image.

The limbs of the figures are generally outlined fragmentarily, while the hands are freely sketched and placed within an otherwise undeveloped plane in a way reminiscent of a sculptor’s preparatory or volumetric sketch. Other elements approximate reality, whereby the artist attempts to achieve what amounts to the impossible in the medium of painting, namely an imprint of the real.

Still other areas are painted with free brushstrokes. What most of these painterly methods have in common is that the paint is partially removed and taken back by being scraped with a palette knife, wiped with a cloth, removed with sticky tape or rubbed with printing paper.

The works in the exhibition show human figures made up of disparate fragments, which arouse the viewer’s gaze through abstract, contrasting and collage-like planes, forms and lines. The canvas oscillates between two- dimensionality and three-dimensionality, whereby the colour compositions of the foreground and background of the canvas interconnect. The relationship between figure and space is consolidated by bright colours, notably light yellow hues. Stencilled elements, collage and painting merge to form a new, autonomous and idiosyncratic visual reality.

Unlike earlier works, in which the figures appeared increasingly isolated in an empty or white space, these latest works radiate a quiet optimism, in spite of their unusual spatial organisation. The images do not refer directly to experiences and observations.

Instead, Plessen seeks a visual grasp of the intensity with which the impressions of the day, just as we are about to fall asleep, flicker across the retina once more in fleetingly chimaeric images, that are not bound by gravity, nor fixed, but adumbrated in a way that never takes on a definitive form.