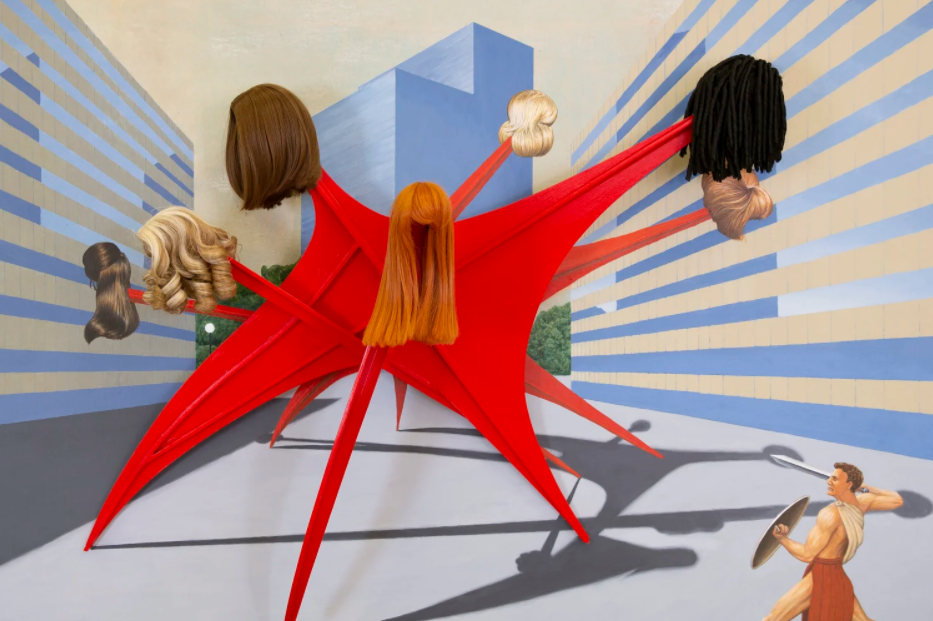 Jim Shaw is widely known for the outlandish narratives and sharp wit with which he brings his dystopian, albeit eerily familiar, universe to life – now more analytical and daring than ever.

His provocative tableaux, whether sinister, comedic, or somewhere in between, are pieced together from the artist’s own imagination and his prolific collection of magazine and newspaper cut outs, posters and prints, comic books and gimmicky advertisements, which he began collecting during his teenage years in Michigan in the 1960s.

Shaw’s practice has always been inherently ‘American’, imbued with national references and critiques, some contemporary, others historic and now deeply embedded into American culture.

In these latest works – painted over found theatrical backdrops, with some featuring subtle sculptural elements – produced during a time of constantly evolving political, social and economic polarity, Shaw plays on oppositions: alluding to past events in service of urgent commentary on our fraught present and blending fiction with reality in order to highlight the fantastic state of contemporary American life.

In new acrylic works on muslin, retro home appliances hark back to the post-War promise of the production line despite their redundant use-value in this context, while politicians and notable public figures are disfigured by the representational effects of their self-centred and aggrandising decisions.

Shaw has never been one to shy away from provocation: the artist boldly imagines Donald J. Trump, President of the United States, and his wife, Melania, descending an escalator into Dante’s Ninth Circle of Hell to find a group of traitors, some of them discarded former aides, frozen alongside Satan in a sea of ice. Shaw’s monsters and villains, whether real or fictional, are larger than life; ultimately, these paintings convey a sense of vicissitude that is reflective of the country’s ever-shifting socio-political landscape.

Throughout the exhibition, Shaw continues his fertile commentary on the grotesquery of late capitalism in contemporary American society. One Percent for Art, is concerned with the country’s booming real estate market. Percent-for-art programmes require a portion of the budget of large-scale development projects be allocated to fund public art and installations; as a result, in cities such as Los Angeles and New York, sweeping avenues and corporate plazas play host to countless classic abstract sculptures – an Alexander Calder stabile, for example – symbols of wealth and power.

The ‘1 percent’, a term that also references the wealthiest echelon of society, implies divide and excess, in order to highlight, in this case, the art world’s tolerance for inequity, and the increasing inaccessibility of culture to those of a lower socio-economic bracket – the irony of the artist’s own participation in what he perceives as a toxic gallery system that predicates cultural access on status and riches is not lost here.

Constructed through his unique lens on esoterica, conspiracy theory, popular culture, and his own fictional religion Oism, these paintings demonstrate Shaw’s fearless desire to tell of an alternate reality, one in which ill intention, conspicuous consumption, gross wealth and corruption are met with consequences. Societal ills are exposed, although the question of whether aspiring to a more transparent future is fool’s paradise remains unanswered.