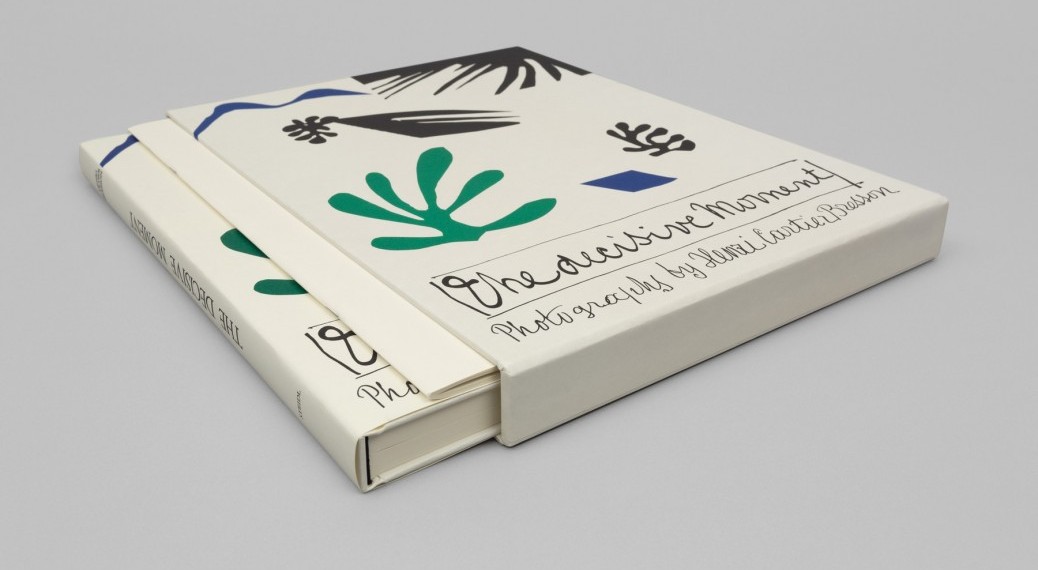 Henri Cartier-Bresson’s “The Decisive Moment” may well be ultimate photo book classic. It has influenced generations of photographers with a title reference to the notion of a perfect image accumulating all necessary elements for the absolute essence of a moment. Originally published in 1952, it constitutes a collection of the artist’s best early works and was refined with a collage cover by Henri Matisse.

Publishing house Steidl has now come up with a new edition of “The Decisive Moment” – the first and only reprint since the original 1952 edition and a meticulous facsimile of the original book that launched the artist to international fame. Diligently reproduced to the finest detail, Steidl seems to have resisted the urge to over embellish the new edition with unnecessary addendums – things can never be truly recreated, but only faithfully retold. An a additional booklet by Centre Pompidou curator Clément Chéroux offers further background information and explains the history and the making of this ground breaking photo book.

Cartier-Bresson was most interested in work that was simple and candid. With his rigorous approach he established himself as a pioneering photographer, artist and visionary thinker who saw photography outside galleries and beyond the daily papers. He had an early interest in the photo book as a public vehicle for his work and put a great effort into “The Decisive Moment”: it was filled with examples of that crucial moment, juxtaposed with delicate geometry and a deep sense of humanity. It was produced, start to finish, in just under six months in New York and France under the title Images à la Sauvette.

The original edition was limited to about 10,000 copies at a time when books were still largely reserved for literature and classical arts. And it was indeed unconventional – with a cover by Henri Matisse, Cartier-Bresson’s personal introduction and richly textured photo gravure prints.

The final edit of 126 photographs taken between 1932 and 1952 appear roughly chronological but divided in the book into two sections – the first section (with exception to two images) corresponds to the years 1932 to 1947 and comprising photographs from Western countries and the second (with one exception) between 1947 and 1952 with photographs made in the East – China, India, Indonesia and the Middle East. According to Clément Chéroux, who penned this new edition’s informative essay on the book’s genesis, Cartier-Bresson’s decision to break the sequence into these two sections also corresponds to the formation of Magnum Photos in 1947, and subsequently, a moment in the artist’s life when he decided to commit himself to photojournalism.

"LAND OF NOTHINGNESS" _ BY MAROESJKA LAVIGNE