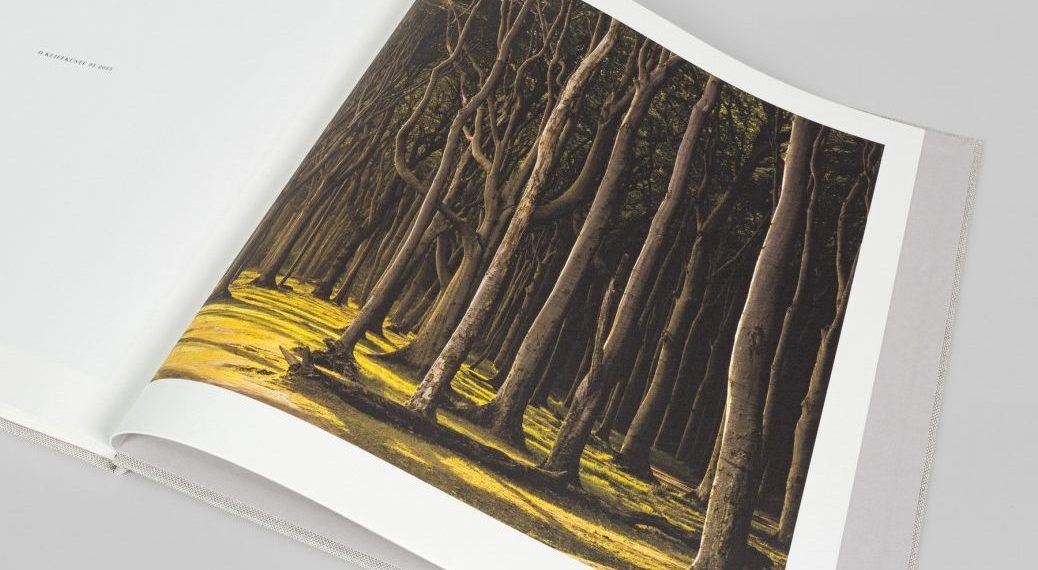 In Woodlands Mat Hennek presents genuine portraits of trees, the results of numerous hikes through various forests in Europe and the USA. Hennek sets out to discover extraordinary places in remote and often difficult to access areas, traveling on the road beyond human civilization for days. He removes spatial landmarks, alternately erasing the ground and horizon to unhinge any sense of direction. Light and shadow, pattern and structure build up to an impressionistic hymn—infinite, without a center, without beginning or end.

Hennek presents the woods as a divine, mystical architecture which we experience as well as see. Through a graphic style that sublimates the landscape into pure abstraction, he eliminates the border between painting and photography, revealing the soul of a landscape—one that is unique, indivisible and an integral part of nature.

Hennek was born 1969 in Freiburg im Breisgau. He worked for several newspapers and radio stations before studying at the European Academy of Fine Arts, Trier and the Lette-Verein in Berlin. Founding the Kasskara agency in Berlin Hennek began by mainly photographing pop musicians such as Sting or Tracey Chapman, but from 2004  he eventually focused exclusively on classical interprets. He created memorable portraits of soloists such as Hillery Hahn, Krystian Zimerman, Hélène Grimaud and Lang Lang, of the conductors Sir Simon Rattle, Kent Nagano, Claudio Abbado and of the opera singers Rolando Villazon, Anna Netrebko and Thomas Quasthoff. In 2006 he gradually started to explore landscape photography. His Woodlands series is the result of numerous wanderings through the Swiss forests and uses concisely taken photographs to capture the decay of forested landscapes. His photographs often don’t include a visible horizon or ground, which creates a disturbing yet soothing effect on the viewer.

The Alpenpässe series is a continuation of the photographic approach that Hannek used for his Woodlands series. This time he photographed details of alpine passes to resemble aerial views, meaning that the viewer cannot differentiate earth from the sky. For his landscape series Hannek only has analogue medium and large format cameras, without the use of any digital manipulation.

"BLACK: ARCHITECTURE IN MONOCHROME" BY PHAIDON

"THE TALE OF TOMORROW" NEW RELEASE BY GESTALTEN