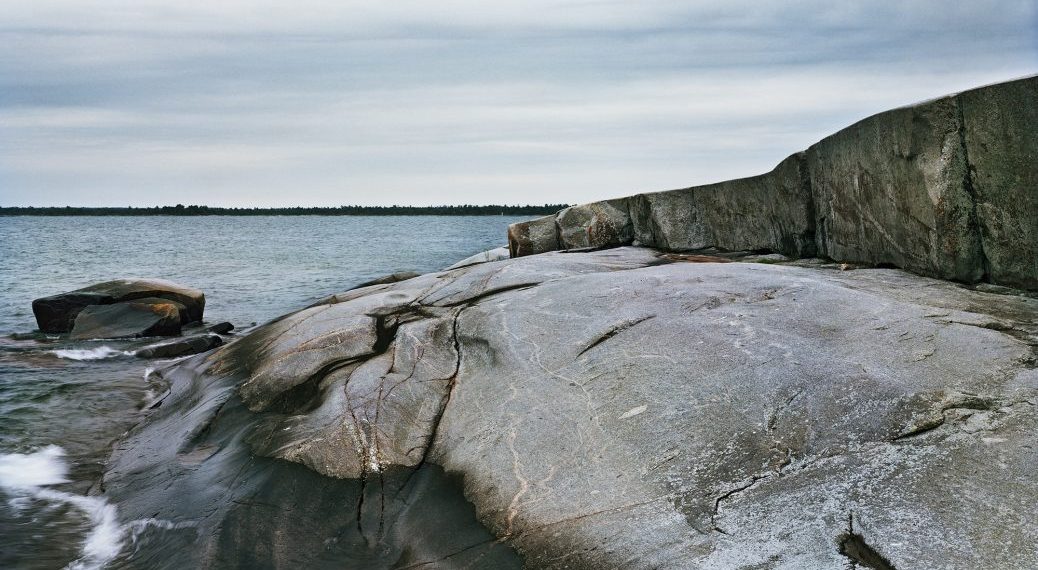 He spent his summers on the Bay since he was a child, and while at university worked with the Canadian Coast Guard patrolling a 150-kilometre section of the coastline that extends from Parry Sound to Killarney.

This shoreline, which is only accessible by boat or floatplane, is sparsely populated with small communities. These communities are functioning remnants of Georgian Bay’s commercial past; mainly fishing, shipping, and tourism.

Hartman began documenting these communities and the surrounding landscape to explore the human desire to be in this beautiful but, at times, harsh and unforgiving environment. He photographs using a traditional 4 x 5 view camera and recently began using a drone to make composite aerial views, producing large scale prints that immerse the viewer in the photograph.

In this series Hartman explores the interaction between humans and landscape and their influence on each other, a common theme found in his work. In his first series, “Highway 69”, he documented the expansion of the highway between Parry Sound and Sudbury as construction scraped away layers of the Canadian shield. This led to “Return”, a series where Hartman revisited Collins and Heron Bay in Northern Ontario, an area where he spent the first three years of his life. Over 30 years later, Hartman journeyed to find out if his memories of time and place were fictional or concrete and to photograph areas similar to the images that were in his mind’s eye.

Hartman’s “Hamilton” series spans seven years and includes more than 40 photographs. Hamilton, a city best known for its steel industry, is now in a state of transition as heavy industry slowly leaves.

Hartman overlooks the factories and the smoke-laden skyline that represented the city for decades and instead documents a cross-section of working-class neighbourhoods and surrounding landscapes. He focuses on the city’s east end, drawn in by the people and buildings of the area.

With his series “The Artist’s Studio”, Hartman travelled across the country documenting Canadian artists‘ workspaces. The photographs are an intimate view of the artists providing insight into their creative processes: both the physical process of how a painting or sculpture is made, as well as the mental process related to the source material and the origin of their ideas.