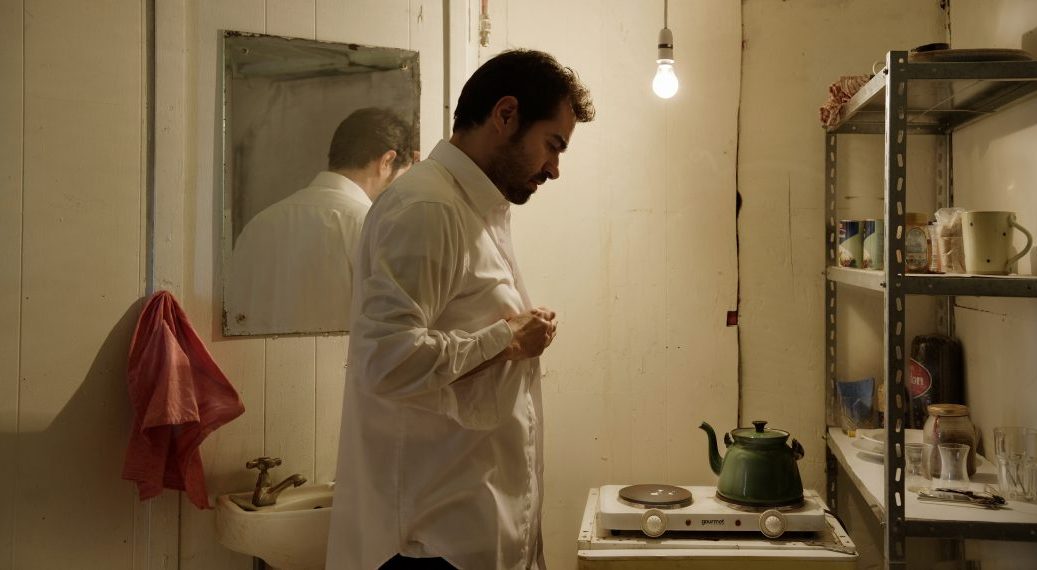 Over the last decades British-Iranian artist Mitra Tabrizian has left a strong mark on the photographic image in art. Her stunning large-scale photographs exude the dramatic power of documentation with utterly contemporary subject matter while at the same time showing an emotional density and suspense that draws from the process of meticulously constructed, carefully staged and precisely lit production that comes close to cinematography.

The artist’s work may be best described as near documentary as it is frequently informed by scenes the artist has witnessed or individuals she has met and then revisits later in a recomposed setting. But she also disavows claims to photographic truth, constructing many of her pictures around inspiration related to philosophic writings, topical socio-economic discourse or her own script of scenes and encounters she wants to work through in depth both intellectually and artistically.

Tabrizian takes her time and prefers to just wonder for a while instead of shooting instantaneously. She also takes every effort to find out more about the protagonists of her works, their personal stories and struggles, their environment and social setting which is often linked to existentially challenging situations.

Her images could be based on a memory fragment that has been percolating in her mind for a while as well as a real recent event that has struck her. To enact it, she finds the perfect spot inside a building or outdoors creating a kind of magical realism. Although she works in a medium that is mechanized and replicable Tabrizian has advanced the notion that photography can be as singular, imaginative and permanent as a great painting or a piece of literary fiction.

Her images are strikingly enigmatic due to their ominous,  disconnected characters. They seem to be rooted in reportage invoking the kind of scenarios you’d read about in the media. Still it’s not clear whether these pictures are meant to be political or whether they represent a neutral visual statement that is open for interpretation. Space and architectural elements also play a vital role in her compositions. The space in which the ominous event is occurring is of key interest for the artist and exudes itself an overwhelming sense of tension.

For Tabrizian, the contemplation of an idea is as important as the finished product. The intensity of the process, where things turn into something else, stems from the time she spends on it and it is this intensity that finally translates into the pictures and makes them stand out for their emotional gravity and imagination.

Illustrating her interest in contemporary social issues are series like “Looking Back” and “Borders”. “Looking Back” examines the hardship of young unemployed who are among the hardest hit by the economic recession that followed the financial crisis. Without getting the media attention it deserves the phenomenon of youth unemployment poses indeed a particular threat to social and political stability.

Studies show that most young people now are ‘destined’ for a life of underpaid work, punctuated by frequent periods of no work. The expression ‘lost generation’ used by politicians to describe young people in today’s Britain has prompted Tabrizian to confront the cold political rhetoric with real faces of those who are affected by the situation but rarely seen or heard. Shot in London, in a dilapidated fringe theatre, a group of young unemployed are looking at the stage, where extracts from the debates on unemployment between David Cameron and Ed Miliband, are playing on a screen.

The image is set in a theatre to indicate allegorically the surreal nature of the crisis suggesting that a write-off of an entire generation is closer to fiction than reality. The run down mise-en-scene could be read as a reference to the economic crisis, or more abstractly as an anticipation of ‘No future’.  Following Tabrizian’s typically subtle approach – what the image portrays is not what is happening on the screen, on stage, but people’s reactions that are mirrored in their faces.

“Borders” again deals with personal and psychological aspects of displacement, identity and migration: The series traces individuals who have left their country of origin – for whatever reason – facing the challenge of being no longer rooted in their home country and not yet having found a new identity and role in the society they emigrated to.

It is that strange feeling of in between and that sense of complete detachment that is highlighted in Tabrizian’s portraits. The immediacy and complexity of the feelings that come along with migration is in this case exemplified in Iranian exiles whose lives changed abruptly and sometimes dramatically – including unexpected downgrades in social status or isolation in migrant milieus. The series’ protagonists are portrayed in locations that could as easily be in Iran as in Britain and thus reflect their “outsider” existence.

But Tabrizian went further and recorded the personal history of all of these exiles in words, too, giving a voice to those who are nearly invisible and yet contribute considerably to the society they live in. Their existence becomes manifest through this series and their seemingly ephemeral lives are now archived and published. For Tabrizian, who emigrated herself as a teenager, this was a process of complete emotional involvement.

Recently the artist has also turned to filmmaking thus successfully extending her career into a new genre. Her critically acclaimed films “The Predator” and “Gholam” have been and are to be shown at a number of festivals – with the latter being presented at the East End Film Festival, London, on 16 June. The story of “Gholam” is pertinently set in London in 2011, following an enigmatic Iranian cab driver, who works at night and doesn’t like to talk about his past.

He has two jobs, yet seems not to be interested in the money. He eats at his uncle’s café every day, yet is fully aware of being betrayed by him. He agrees to the arrangement his mother makes for his return home, yet has no intention of going back. We learn that he was once a war hero, and yet disappeared from the battlefield without a trace. A man with no past, no future, no conviction, he still gets involved in the conflict of a total stranger and carries it through to the very end.

Born in Tehran, Iran, lives and works in London, Mitra Tabrizian has exhibited and published widely and in major international museums and galleries, including her recent solo exhibition at the Tate Britain in 2008 – other solo shows include, Museum of Folkwang, Germany, 2003, Moderna Mussset, Stockholm, Sweden, 2006 amongst others. Her books include, Correct Distance (Corner house publications) with an introduction by Griselda Pollock- Beyond the Limits (Steidl 2004) with an introduction by Stuart Hall – Another Country (Hatje Cantz, 2012) with a foreword by Homi Bhabha.

PER KIRKEBY - PAINTINGS AND BRONZES OF THE 1980s AT WERNER GALLERY