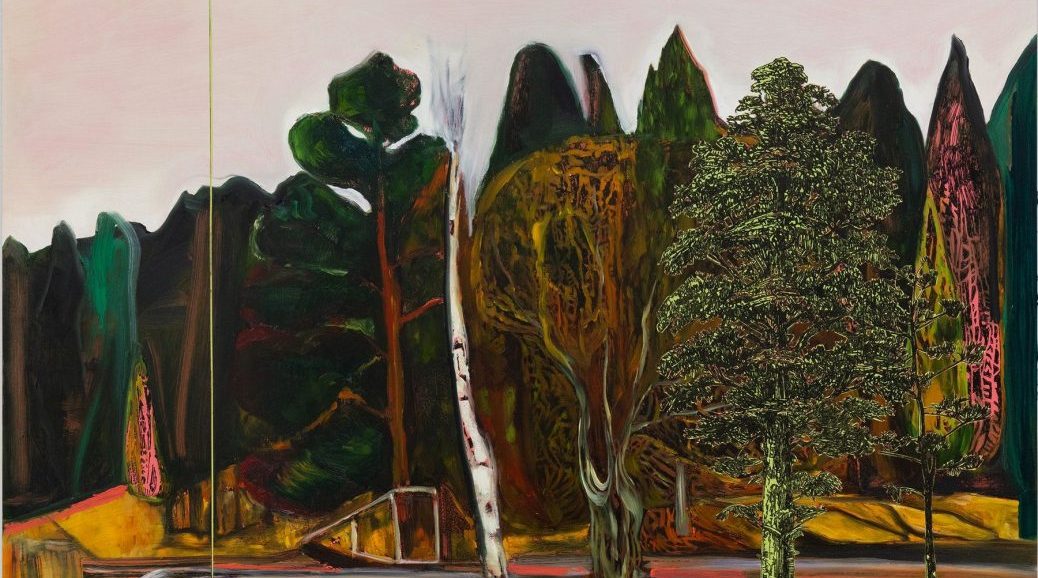 “Reflections on the Anthropocene” presents recent works of Los Angeles-based artist Whitney Bedford – reflecting upon how humans have chosen to record images of the natural world. Bedford’s new landscapes – now on view at Vielmetter Projects, Los Angeles – draw upon an archive of historical landscape paintings to illustrate how images from the past underscore the dire reality of climate change and shifting ecosystems in the present.

In this series of paintings, all titled Veduta after the tradition of “view paintings” made for travelers on their world tour in the years before photography, Bedford literally renders, reinterprets, and collaborates with landscapes made by Avery, Constable, Sargent, and others; bringing a sense of urgency to the idea of painting as souvenir.

The historical paintings she has chosen to reinterpret capture sublime or bucolic visions of Europe and North America, without evidence of industrialization. Originally painted to serve as reminders of places visited, spiritual inspiration, or postcards from yet to be conquered frontiers, the paintings that Bedford reinterprets in these Vedute serve as collectively legible reminders of a time before human exploitation of natural resources shaped a new geological epoch.

As she translates these landscapes into her own hand, she also intervenes in their composition, arranging precisely drawn desert plants on stages and behind glass walls in the foreground of each work; sirens from an arid, anxious future. Known for precisely rendered landscapes and shipwrecks whipped into painterly frenzy by her expressive brushwork, Bedford has an ongoing interest in how images can act as votives for significant ideas and experiences, political or emotional. These new works mark a shift from Bedford’s previous landscape paintings, in which her painterly skill was most often deployed as an emotionally evocative contrast to her drawing; meticulously rendered scenes disrupted or intensified by energetic gestures.

Previous landscapes often featured a low horizon, gentle palms, and more recently compositions of Southern California flora that could be interpreted as re-enactments of the figurative compositions of monumental 19th century history paintings. These allegories of potential and of the emotional experience of making a place one’s home have given way to a more critical approach to landscape.

Whereas in historical landscapes, and in Bedford’s own previous work in the genre, open expanses of land represent opportunity and utopia, these Vedute ask the viewer to reconsider viewing the natural world as available for immediate occupancy. Or at the least, to consider the effects of this perspective on current circumstances.

Bedford’s process has also shifted in these works. In past paintings, drawing was used to create an architecture for gesture. Here, though the paintings technically begin with the drawings, a painstaking process of masking and unmasking pushes the drawn flora to the fore and places the viewer at a further remove from the pastoral scenes behind or outside of the space of drawing. The distance created between painting and drawing underscores Bedford’s archival research and careful selection of images that seem to belong to a lost or disappearing world. Bedford received her MFA from the University of California, Los Angeles in 2003. She was the winner of the 2001 UCLA Hammer Museum Drawing Biennale and received a Fulbright Graduate Fellowship from Hochschule der Kuenste, Berlin in 1999. She has had solo exhibitions at Art:Concept, Paris, France; Carrie Secrist Gallery, Chicago, IL; D’Amelio Terras Gallery, New York; and Starkwhite, Auckland, New Zealand. She has been included in group exhibitions at the Pizzuti Collection, Columbus, OH; the Jewish Museum, New York; Massachussetts Museum of Contemporary Art, North Adams; and the Museum of Contemporary Art, Denver.