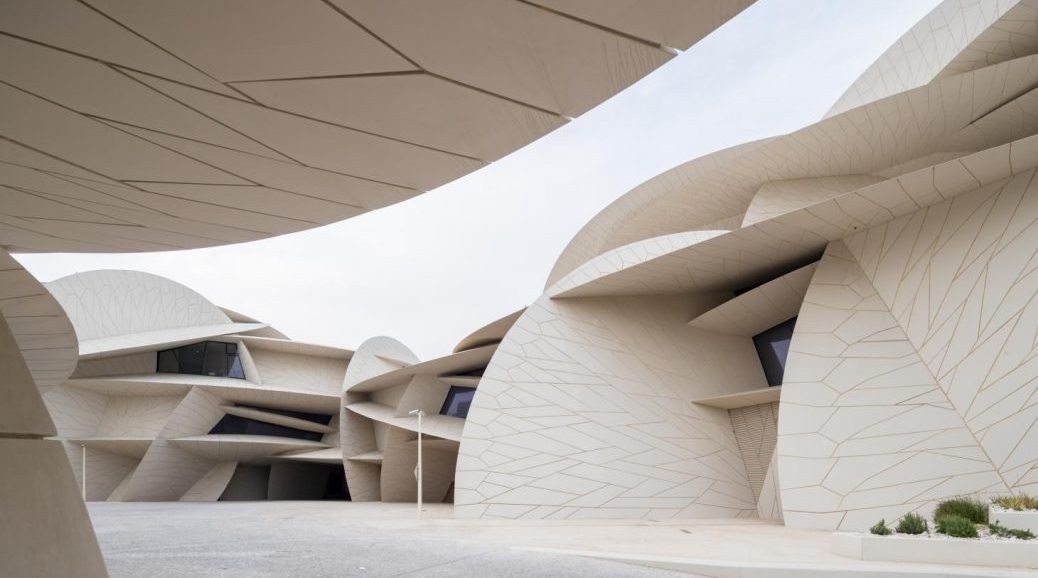 After a decade in the making, the National Museum of Qatar has just been inaugurated with its mastermind, French architect Jean Nouvel, at the center of attention. Ateliers Jean Nouvel presents a breathtaking building featuring a dominant roof construction and an overall shape coming close to a multifaceted sculpture. Inspiration has been taken in part by ‘desert roses’ with their typically clustered interlocking crystals that emerge out of the sand.

Nouvel describes in a personal statement how the concept was created and how underlying thoughts and research found its way into the project: “Qatar is a young nation in the Persian Gulf, a peninsula, a tongue surrounded by water where the desert reaches into the sea. The Qatari descend from a nomadic Arabian people who settled in this maritime desert.

Some became fishermen, others hunted for pearls. Some looked to the nation’s hidden treasures, the resources that lay beneath the sand or under the sea. Others, inspired by their country’s central location in the Gulf, began to talk, to communicate, to reach out. The impulse for this metamorphosis came from Doha. A glance at photographs of Doha in the 1950s and 1960s, compared with today, is sufficient to understand how much this part of the world has changed. From a little village, it has become a capital. What could be more natural, then, than the desire to testify, to talk about identification, about the evolving identity of this country as it reveals itself on the sensitive paper of history? And what could be more logical than to give concrete expression to this identification process in a National Museum of Qatar that will relate the physical, human and economic geography of the country, together with its history?

One place was symbolically destined to fulfill this role: the cradle of the Al Thani family in Doha; a modest, noble, simple palace from where this twentieth-century adventure began. It stands at the city’s southern entrance, the busiest urban gateway as it also welcomes visitors arriving from the airport.

The architectural study which initially was coupled with the programmatic study, brought to light the underlying paradox of this project: to show what is hidden, to reveal a fading image, to anchor the ephemeral, to put the unspoken into words, to reveal a history which has not had the time to leave a mental imprint; a history that is a present in flight, an energy in action. The National Museum of Qatar is proof patent of how intense this energy is.

Of course it will be home to the traditional geological and archaeological artifacts; of course tents, saddles and the dishes will bear witness to nomadic life; of course there will be fishermen’s utensils, boats and nets. Most importantly, though, it will spark an awareness that could only otherwise be encountered, experienced, after months spent in the desert, in pursuit of the particularities that elude our grasp except when the whims of Time and Nature allow. Or by taking an helicopter or 4WD to discover the contrasts and stretches of beach of the Qatari peninsula. Everything in this museum works to make the visitor feel the desert and the sea. The museum’s architecture and structure symbolize the mysteries of the desert’s concretions and crystallizations, suggesting the interlocking pattern of the bladelike petals of the desert rose.

A nomadic people builds its capital city and talks about it through this emblematic monument built with the most contemporary construction tools (steel, glass and fiber concrete), and will communicate through high-definition cinema, incorporating visitors’ movements into its museography : this museum is a modern-day caravanserai. From there you leave for the desert and you return from it bringing back treasures: images that remain forever engraved on your memory.”