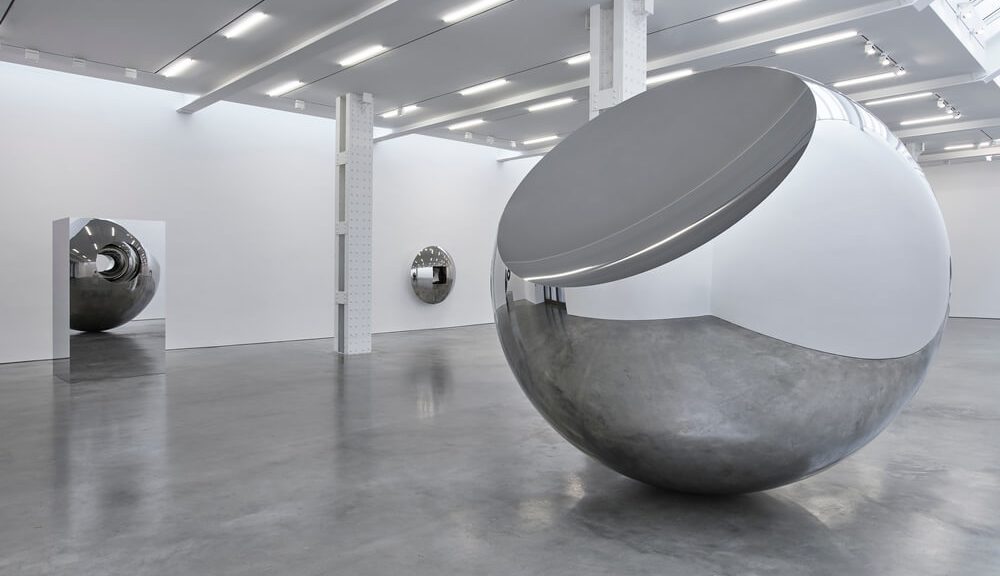 Anish Kapoor is one of the most influential sculptors of his generation. Perhaps most famous for public sculptures that are both adventures in form and feats of engineering, Kapoor manoeuvres between vastly different scales, across numerous series of work.

Immense PVC skins, stretched or deflated; concave or convex mirrors whose reflections attract and swallow the viewer; recesses carved in stone and pigmented so as to disappear: these voids and protrusions summon up deep-felt metaphysical polarities of presence and absence, concealment and revelation.

Forms turn themselves inside out, womb-like, and materials are not painted but impregnated with colour, as if to negate the idea of an outer surface, inviting the viewer to the inner reaches of the imagination.

Kapoor’s geometric forms from the early 1980s, for example, rise up from the floor and appear to be made of pure pigment, while the viscous, blood-red wax sculptures from the last ten years – kinetic and self-generating – ravage their own surfaces and explode the quiet of its environment.

I think I understand something about space.
I think the job of a sculptor is spacial as much as
it is to do with form.

Kapoor redefined contemporary sculpture in the 1980s through innovative approaches to scale, color, volume and materiality, and by delving into the illusory. Perhaps most famous for public sculptures that are both adventures in form and feats of engineering, Kapoor’s works invite viewers to interrogate their relation to inhabited space.

One of the defining languages of this artist’s oeuvre is indisputably his manipulation of space, and the mirrored surface as a material in this endeavor can be seen internationally through his major public commissions.

Kapoor invites the viewer to not simply look at the object, but through and beyond it, invoking both terror and beauty, and questioning absence and presence in the face of the force of nature.

There are resonances with mythologies of the ancient world – Indian, Egyptian, Greek and Roman – and with modern times.

Since the Romantic conception of the sublime, artists such as Caspar David Friedrich have expressed the sensation of wonder evoked by the natural landscape. Unlike Friedrich, Kapoor’s stainless steel works gaze back at you, existentially reflecting the self.