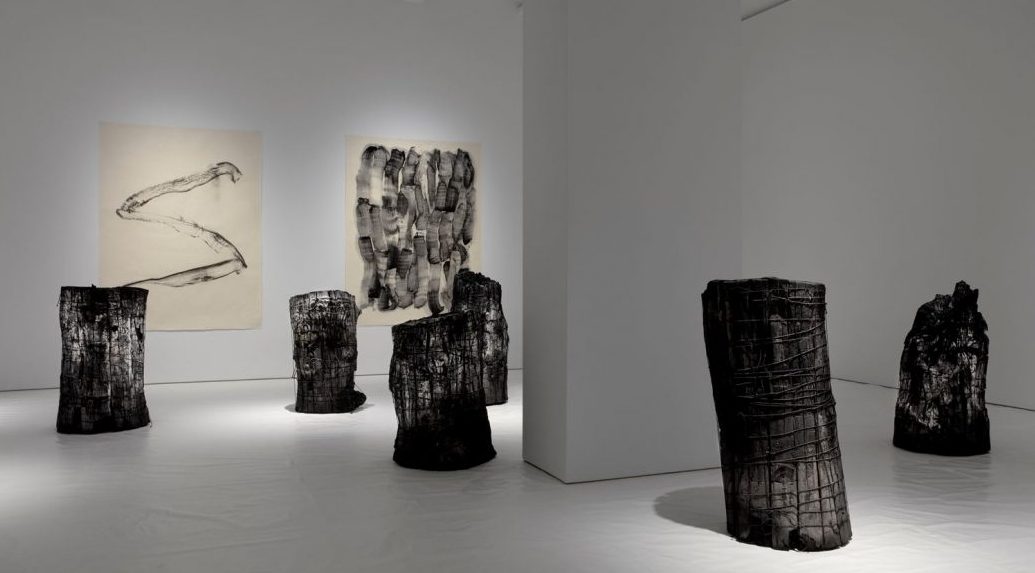 Korean artist Lee Bae, based in Paris and Cheongdo, has gained international recognition for is extraordinary aesthetic and material experiments with charcoal – comprising various media as well as physically immersive installations.

At the core of his oeuvre are three distinct bodies of work representing drawings, paintings, and sculptures : ‘Issu du feu’, ‘Landscape’, and his most recent works on paper, ‘Untitled’.

Charcoal has figured prominently in Lee Bae’s practice since 1990, when the artist first moved to Paris and took up the ubiquitous material out of economic necessity. In this time of transition, charcoal also provided a cultural link to home, recalling the soot-based India ink used in Korean calligraphy but also the material’s many domestic applications: In Korea, it has been used in homes as a natural purifying agent for thousands of years. Lee Bae continues to engage charcoal with formal and conceptual rigour, creating stunning works of art that draw out nuanced meaning from the ancient matter.

However, Lee Bae’s works are not industrially produced, but created through profoundly personal and organic means of production. Sourced from his hometown of Cheongdo, South Korea where the artist also maintains a studio, Lee Bae carefully selects the pine trees that he then burns for two weeks in a custom-made kiln, transforming the verdant wood into brittle, black totems.

Wrapped in elastic bands, these freshly carbonised forms reflect the fragile equilibrium between destruction and renewal. Viewers are invited to wander through a charged space, approaching the installation as a site of contemplation. Lee Bae’s corresponding ‘Issu du feu’ paintings highlight the material’s more luminous qualities. In these phantasmagoric works, charcoal fragments are combined into dense, faceted compositions.

While the iridescent wood grain appears to be painted by the bristles of a brush, these subtle details are instead achieved through a process of gentle erasure; it is only after much careful sanding and polishing that these surfaces reveal their shimmering spectrum of blacks and greys.

Another iconic series of Lee Bae is ‘Untitled’: these works embody a more explicit mode of mark making. Drawn on paper with a charcoal stick dipped in natural fixatives, the abstract compositions of both singular and serialised gestures call to mind the art of calligraphy. Yet the individual marks do not signify as language, landing instead in the symbolism of charcoal as both artistic tool and indexical trace.

The artist’s ‘Landscape’ paintings have a strong reference to materiality and process through their flat, monochrome surfaces made up of thick, black lines conjoined on a grid. These are – on closer inspection – not strokes of paint but indeed arge quantities of charcoal compressed into thick relief.

While their surfaces exhibit faint textural details, their jagged, imperfect edges reveal the labor of artistic production: streaks and smudges that result from a simultaneous process of accumulation and removal that involves incorporating the residual powder back into the works with glue, rendering several discrete pieces into a single mass.

Lee Bae’s artistic practice involves a deep commitment to the cyclical transformation of charcoal, ushering the raw matter on its journey from wood to fire to carbon to powder. Tracing this transformation the artist allows viewers to experience the surprising aesthetic multiplicity of this extraordinary material.

Lee Bae was acknowledged among Korea’s artists when receiving the ‘Artist of the year award’ from the National Museum of Contemporary Art in 2000. On 2009 He has received the Korean Culture one Artist award from Paris, and on 2013 He received the Korean Art Critic Association Award.