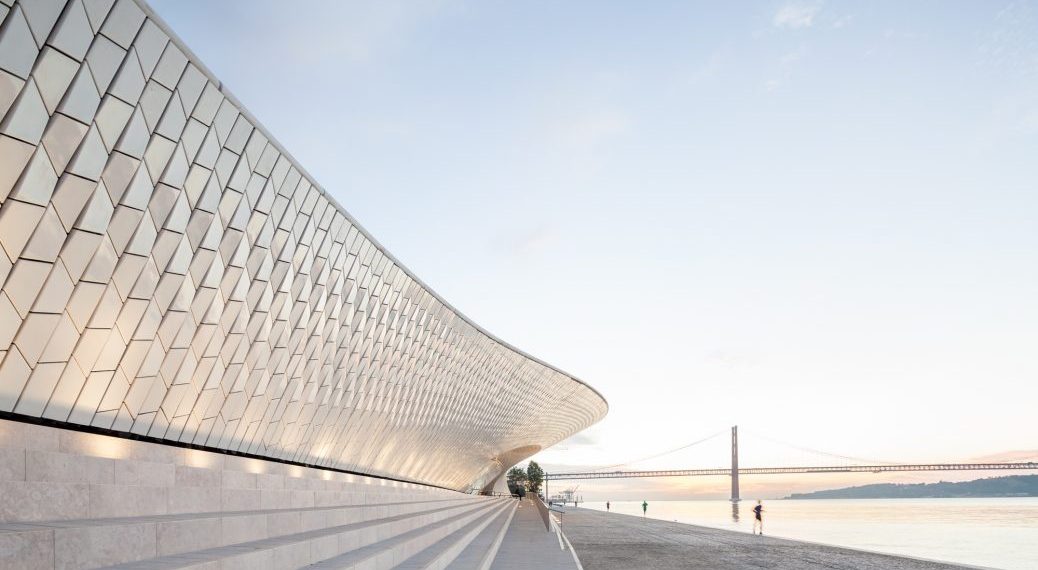 Lisbon’s Museum of Art, Architecture and Technology (MAAT) is the perfect example for internationally renowned architect Amanda Levete’s sese of elegance and style and it is predestined as a location to discuss current trends and visions of urbanism.

The futuristic building  is situated at the bank of the river Tagus and has seen an enthusiastic acceptance by the audience since opening its doors to the public.

Levete describes her practice stating “Since its formation in 2009, Amanda Levete Architects, AL_A, has refined an intuitive and strategic approach to design. Collaborating with ambitious and visionary clients, we develop designs that are conceptualised as urban projects not just buildings and projects that express the identity of an institution, a city or a nation.”

In this sense, the inaugurating exhibition of the MAAT Design Museum, “Utopia/Dystopia: A paradigm shift in art and architecture” , which was inspired by the 500th anniversary of Thomas More’s famous essay “Utopia”, presented key ideas and interests of Levete.

Architects like Levete include in their work shifts in political structures through physical manifestations of constructed and envisioned urban designs. Establishing a dialogue with the site-specific requirements and producing insight and critical reflections on themes of the contemporary socio-political discourse is part of the creative process.

Utopia and Dystopia: these two terms reveal a contstant dichotomy in times of paradoxical acceleration, where anxiety and optimism collide.

Located on the pulsing waterfront at Belem, MAAT features more outdoor than indoor space and is as much about connecting people to this part of the city as it is about boosting home grown talent in a country that is accustomed to seeing its artists leave. “Lisbon is one of my favourite cities after London”, says Levete. ‘It’s high octane, relaxed, tolerant and affordable, the climate is sublime and it has the best seafood in the world.’

Another signature building is Levete’s extension of the Victoria and Albert Museum V&A in London. Consisting of 1,100 metres of space, the Sainsbury Gallery is dedicated to the sort of blockbusters the V&A has become expert at hosting, and its inaugural exhibition ‘Opera: Passion, Power and Politics’, is hoped to match previous hits such as Alexander McQueen s Savage Beauty and the retrospective of  David Bowie.

The gallery is accessed through a screen designed in 1909 by the museum’s original architect Sir Aston Webb to hide the boilers, newly remodelled to become a colonnade, and in the new Sackler Courtyard, made entirely of porcelain tiles in homage to the museum s rich tradition of ceramics.

Levete’s combination of old and new perfectly reflects  the  DNA of the V&A and is, by her own admission, a wish-list project. Levete dreamt of working on a major public and cultural project since she started as an architect, and it ‘doesn’t get much better than this’, she says. ‘This isn’t just about a gallery; it’s an opportunity to create a new public space for London’.

Further commissions of AL_A comprise Central Embassy (2017), a 1.5 million sq ft luxury shopping mall and hotel in Bangkok on the former grounds of the British Embassy; a 13-hectare media campus and a 37,700m2 headquarters building for Sky (2016) in London; and MPavilion 2015 in Melbourne.

Ongoing projects around the world include the transformation of the flagship Galeries Lafayette department store on Boulevard Haussmann in Paris; a new centre for the cancer care charity Maggie’s in Southampton; two new buildings for Wadham College at the University of Oxford; The Courtyard, a series of community mixed-use developments on 39 sites across Moscow; the Monte St Angelo subway station in Naples and the transformation of Paisley Museum in Scotland.