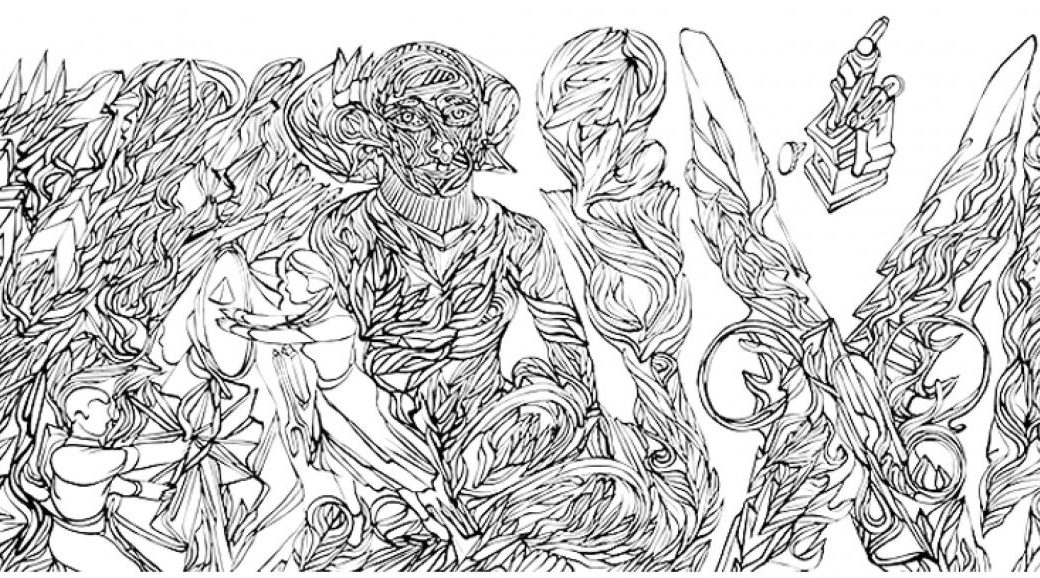 Curator Christina Chirouze Montenegro presents the work and vision of Guatemaltecan artist Marlov Barrios on the occasion of his show „Mimesis“ at La Maison de L’Amerique Latine in Paris.

Painted from 13 to 18 May 2019 – in a total of 24 hours of work – Mimesis is a mural as well as an exhibition, conceived as an anachronistic temple where cultures and temporalities interlock and mingle. Presented in the “Asturias Room” of La Maison de l’Amérique Latine in Paris, it is the first solo exhibition of Guatemaltecan artist Marlov Barrios in Europe.

The first impression is the density of the work, but little by little patterns and figures stand out. In the center a Mayan goddess seems to protect or generate strange superheroes, while on a corner a snake-bird (reference to Quetzalcoátl) threatens a baseball player who protects himself with his bat.

“This joins the leitmotiv of the
work of this prolific artist for whom the current world is
a space-time where cultures but also temporalities
are mixed, coexist, compete …”

Vegetal and fantastic fauna, born from the brush of Marlov Barrios, flows, transforms and camouflages – simulating the other in a constant game of mimicry. Inspired by the figures carved in the stone of the Mayan pyramids, four sculptures representing Star Wars characters were placed at eye level in order to lead the spectator towards a face to face experience with these Knights of the Apocalypse of modern pop culture. The adhesive vinyl that seems to spring from the torso of the central character is a reference to an iconography that travels Guatemala from North to South and East to West: the Chicken Bus. These popular buses are decorated by the families who own them in order to bring them good luck on the road or to affirm a  rural identity linked to their region of origin. In this colorful setting elements of mass culture (e.g. the Rolling Stones tongue) are brought to the status of icons .

On the left side of the room the sky is cluttered with various objects: bananas, hats, planes, satellites, rifles, machetes. Were they sent to the air as in a crazy party? Or are they falling on humanity in an apocalyptic rain? The flags have no color: blue, white, red as in the French one; blue and white as in the Guatemalan one? The viewer can color them by imagination just as he/she wants.

The two sculptures placed on a base make us think about the political and economic power and the tension between center and periphery.

In the piece Prolongación, the Gran Jaguar (emblematic pyramid of the Mayan site of Tikal in Guatemala) is dominated by New York’s Chrysler Building in a ​contemporary reference to the Conquista: Catholic churches erected on Mayan temples as the supreme symbol of Christianity’s victory over local „barbarism“ is replaced by a capitalist symbol – the contemporary religion? The sculpture Nodriza is revealed by its title: the pyramid of Chichen-Itza, a great monument of Yucatec Mayan culture, would be the „nurse“ of the Pentagon. Migrations, power relations, links of agricultural dependence … a plethora of open interpretations comes to mind.

Also on show are Marlov Barrios‘ ink drawings on paper – with a more detailed line. They were all made before the exhibition, as a mental preparation by the artist and as an introduction to the subject of mimicry .

In a world of references intrinsically Guatemalan, Marlov Barrios conceives his work from Paris, thus creating a subtle confrontation of cultures . This joins the leitmotiv of the work of this prolific artist for whom the current world is a space-time where cultures but also temporalities are mixed, coexist, compete, and sometimes fight until total assimilation. ​