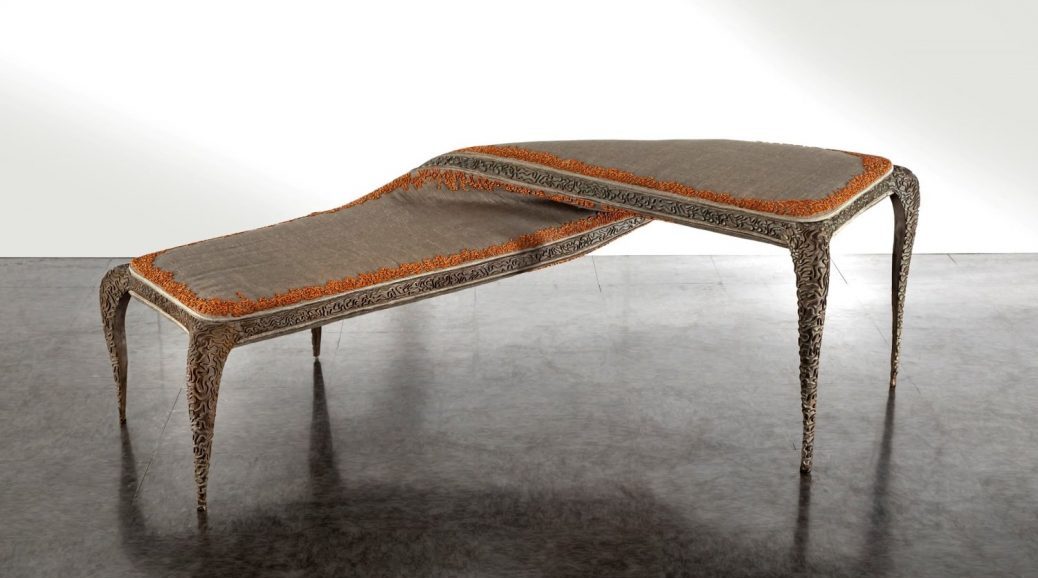 Sebastian Brajkovic is widely celebrated for his sophisticated and subtle furniture that subverts design conventions and creates elegantly distorted containers through which to relay complex ideas.

His current show at David Gill Gallery London “The Occidental  Artisan” is anchored by a group of benches and chairs whose iconoclastic, anthropomorphic forms are juxtaposed with a restrained, 18th century aesthetic.

Brajkovic conceives of the seat and the sitter as two bodies interacting, each a reflection of the other. ‘I see the chair as a human shape that holds us,’ he says; ‘I look at a bench and ask, how does it move, where does it turn or twist at the waist?’

Calligraphic painting, and the sheer physicality of making it, evokes Brajkovic’s bodily experience of his art; having trained with a Chinese master, he uses calligraphy to ‘look for shapes.’

Brajkovic also explores time, history, fine art and mathematics in his practice, but always with beauty as the endgame. ‘I like taking mathematical thoughts and doing something elegant with them,’ he says, and nowhere is this clearer than in the Lemniscate chair.

A delicately embroidered Mobius Strip, this piece is the embodiment of that process of disorientation that so beguiles in Brajkovic’s work. ‘I want to make things that are simple but I find it necessary to place considerable obstacles in my way,’ he says. His determinedly artisanal, even archaic, techniques speak to a love of materials, but also to his preoccupation with what he calls ‘agelessness.’ While they appear to have been plucked from an Enlightenment drawing room and manipulated by the hand of some mischievous deity, these works are also redolent of ancient worlds and other eras, while anticipating an uncertain future.

Born in Amsterdam in 1975 to a Dutch-Indonesian mother and a Croatian-Italian father, Brajkovic studied cabinet-making at the Meubelvakschool before enrolling at the Eindhoven Design Academy. He made his first Lathe chair for his final student show, in 2006, which was then exhibited to much acclaim at Salon Milan in the same year. Brajkovic first showed with Carpenters Workshop in 2008 and has since made five Lathe series.

He created his first piece for David Gill, Banquette, in 2018, and is now represented by the gallery. Brajkovic lives and works between Amsterdam and Switzerland with his Hong Kong Chinese partner.