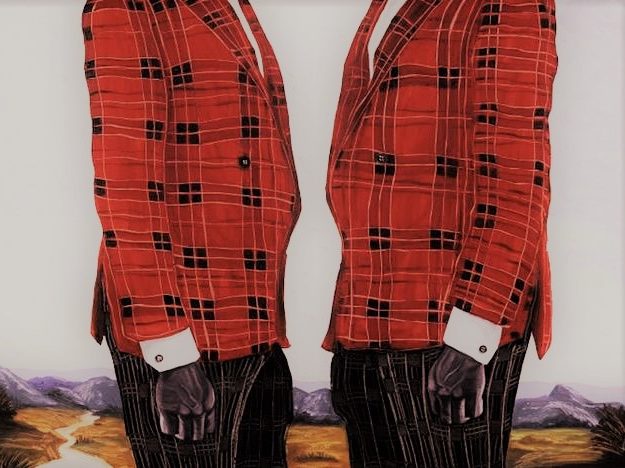 The son of a twin, Otis Kwame Kye Quaicoe takes on the subject of dualistic representation and double portraiture in twelve new large-scale paintings he’s presenting at Roberts Projects, Los Angeles. Depicting both male and female pairings, his subjects are outwardly identical in appearance and placed within casual domestic settings.

The backgrounds continue his recognizable stylistic treatment of paint, whereas the sheer physicality of Quaicoe’s hand lends itself to more immediate readings of the potency of the painting’s visual impact. Drawing inspiration from the tradition of African tattoos, Quaicoe transmits on his subjects’ bodies the echoes of memories by directly carving into the paint, drawing onto their faces, arms and legs.

These markings embrace each curvature and line of the body, and can appear almost as preparatory sketches transposed on the surface of the paint. Exquisitely placed fabric details highlight important details of each subject. Across this body of work, Quaicoe’s visual vocabulary celebrates both materials and cultural influences to create an homage to the rich history of Black portraiture.

Two men in slouchy blue berets pose almost defiantly in front of a wall-hung familial portrait, differentiated only by their colored shorts and by the potency of their gaze. Young boys and girls in fashionable clothing pose and preen, exuding a cool self-awareness only possible in a social media age, though on a deeper dive, individualistic appearance choices materialize.

The unrefined quality of the subject’s pose and demeanor hints at a shared intimacy and natural bond, whether manifested by a physical or emotional familiarity. Similarly, whether by design or chance, Quaicoe insinuates that each of the subject’s individual identity is tied to that of his or her companion.

Twinned and inseparable, twins are the existential instantiation of spirit, which explains the expansive, joyful rituals surrounding their births in Ga culture. Quaicoe’s new paintings engage with these complex dynamics while approaching considerations of color, line, and shape through the structures of historic portraiture. That said, these portraits, as most of Quaicoe’s figurative work, can be read as direct confrontations to the institutional portrayal of Black individuals.