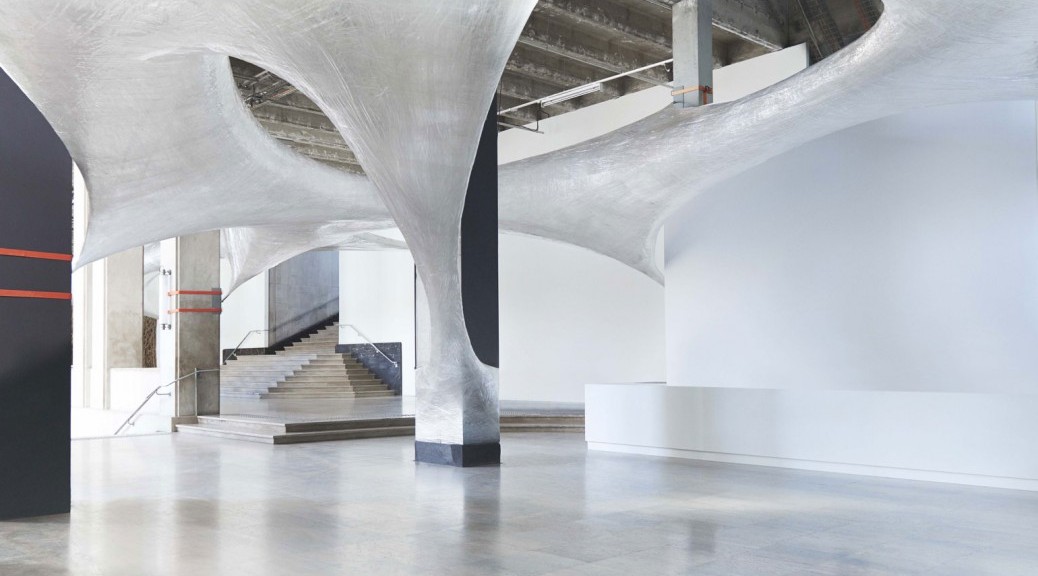 Inside and Tape Des Moines are stunning exhibition on the crossroads of art, installation, architecture and design – they represent the core ideas of Numen and highlight its iconic works of organic tape structures.Numen’s installations are typically staged inside extraordinary spaces like the I.M.Pei designed gallery, a masterpiece of high modernistic architecture at Des Moines Art Centre. Or the Palais de Tokyo which showcased their work in 2017.

Lightness and translucency of the installation are highly accentuated by radical contrast between the structure and the rough, Brutalist concrete surface and expressive geometric composition of the gallery building.

Deriving from of such a dominant host, the parasite structure formes an organic representation of actual spatial flux of the building. The inhabitable structures of Numen’s artworks thus follow the major trajectories of visitors movements, enabling them to move along the usual paths, only in an elevated, enclosed, surreal space of Tape. “Tape Paris” is made entirely of tape  and not the first time that the collective known as Numen/For Use has installed one of these futuristic branched structures in a public space; all titled ‘Tape’, they have appeared in Frankfurt, Melbourne, Tokyo and elsewhere. But the impact is no less impressive. “Tape Paris” is made for intrepid visitors who might want to consider that the construction’s tensile strength of  44km worth of tape is enough to support five humans at once.

Thus the experience shifts from jittery to joyful. Being inside feels simultaneously primordial and futuristic, outworldly yet familiar. Just the crackling noise as the tape stretches to accommodate the body weight gives you an unsettling reminder that this ordinary material is doing an extraordinary thing.

The work of For Use has been very consistent from the beginning, founded within the heritage of modern design enhanced with the application of new materials and technological capacities. The designers of the Numen group came together in 1999 in the consequence of a desire to create a framework for dialogue and the exchange of ideas concerning design liberated from the restrictions of the banality of a transition society and the sterility of naive radicalism. Quite deliberately rejecting being turned into an ordinary design studio, Numen spontaneously became a guerrilla laboratory for the nurture and reaffirmation of classical modernist virtues, infiltrating via roundabout routes into the visual reality via actions related to the underground club scene in which on the whole a graphically dilettante chaos reigned.

From a serious of individual events Numen created brands as if they were corporate visual identities, systematically producing graphic material in a range from plastic flyers to video projections within a succinct form of expression reduced to the most essential.