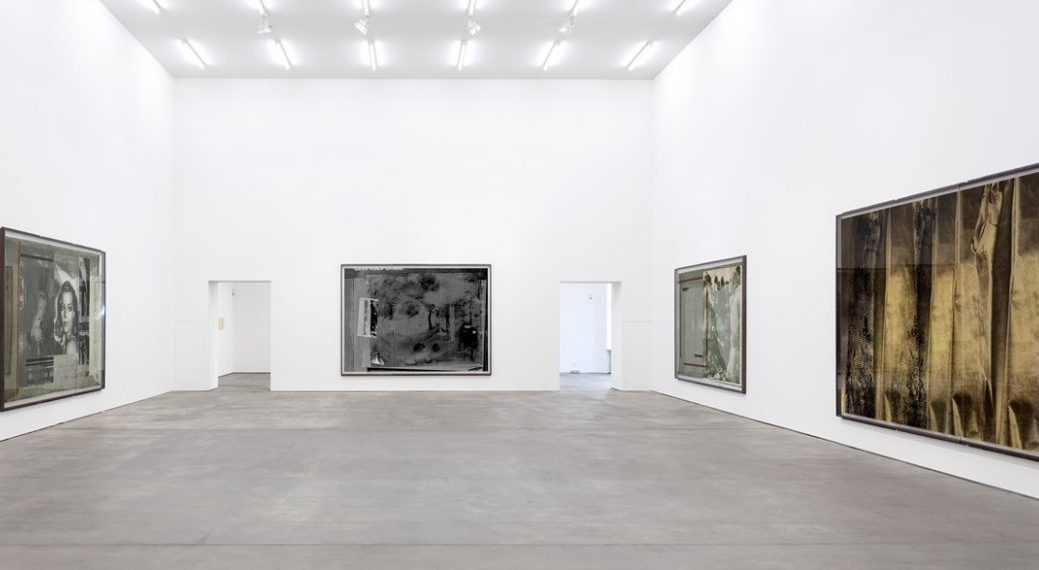 At the heart of Astrid Klein’s work is a reflection on mechanisms of representation, visual stereotypes and power structures that guide and determine both our perception and our thinking. She combines existing visual material with equally important text fragments drawn from an in-depth examination of philosophical, aesthetic and scientific theories.

Klein’s continuous re-arrangement, transformation and filtering of image and text elements gives rise to complex compositions that cannot be tied to any one, unequivocal statement. On the contrary, it is the viewer’s responsibility to find meanings and create semantic links within the works. They are provocative at the content level but not only; formally the works also testify to the artist’s enormous mastery of materials.

Time and again, she questions the possibilities and limits of various artistic formats, whereby the potential of painting plays a particularly important role in her considerations. The artist’s current exhibition at Sprüth Magers centres on a presentation of the CUTs (1986/1996) group of works. These collage pieces were first shown in 2018 as part of Klein’s major retrospective at the Falckenberg Collection in Deichtorhallen Hamburg-Harburg. Astrid Klein was one of the first artists to work with large-format slides; placing photographic and text elements in dialogue with one another in her typically rhetorical style. Her imagery derives first and foremost from an inventory of pictures that recalls a collective visual memory. By intervening in the existing pictorial material, changing and rearranging it, the artist addresses both regimes of the gaze and visual structures as well as specific mechanisms of representation. In contrast to her famous collages of the 1970s, the CUTs also place a certain amount of importance on the images’ spatial dimension. Astrid Klein uses transparent film as the support material for her collages, the translucent surface texture of which allows traces of the artistic working process to become visible.

Still, the synthesis of light and material reveals more than just how the works are put together; it also appears to dissolve the two-dimensional character of the images, giving them more of a sculptural character. The size of the works also makes it possible for the viewer to see the collages from different perspectives depending on where they are standing.

The collages are accompanied by a selection of the artist’s early drawings on display in the small exhibition room. These drawings, which have only rarely been presented to the public, are crucially important for Astrid Klein’s oeuvre and already attest to her pronounced interest in the collage technique. In arranging different materials together and mounting the drawing paper on aluminium foil, for example, or covering its surface with transparent paper, she creates different layers that expand the pictorial space.

The layering process is a conscious formal decision by the artist that is further reflected in the messages conveyed within each work. Klein combines drawings, fragments of ideas, and literary and philosophical references on the paper’s surface, opening up spaces of thought in which political, theoretical and aesthetic considerations are placed in dialogue with one another.